This Weekend Only: Get Select New Gay Movies and More on DVD for Just $15.99!

THIS WEEKEND ONLY, you can take an extra 20% OFF a wide selection of in-stock DVDs. Everything usually priced at $19.99 will be marked down to $15.99, automatically, for a limited time only. This includes some of the newest and hottest gay movies as well as select adult titles.

CLICK HERE to visit our site and start shopping. This exclusive offer ends Monday, September 20th at 4:00 PM (ET). Below, we’re highlighting just a few recent gay movies that are included in the sale! 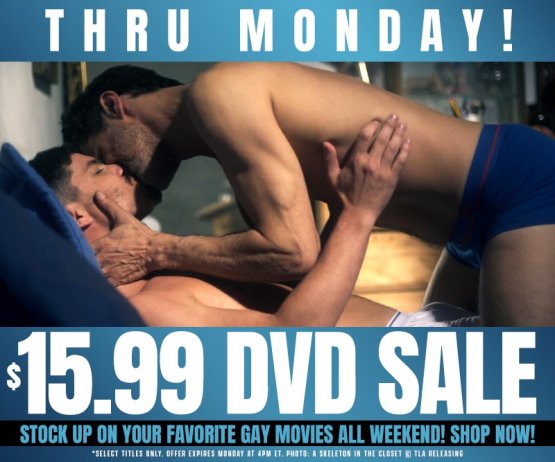 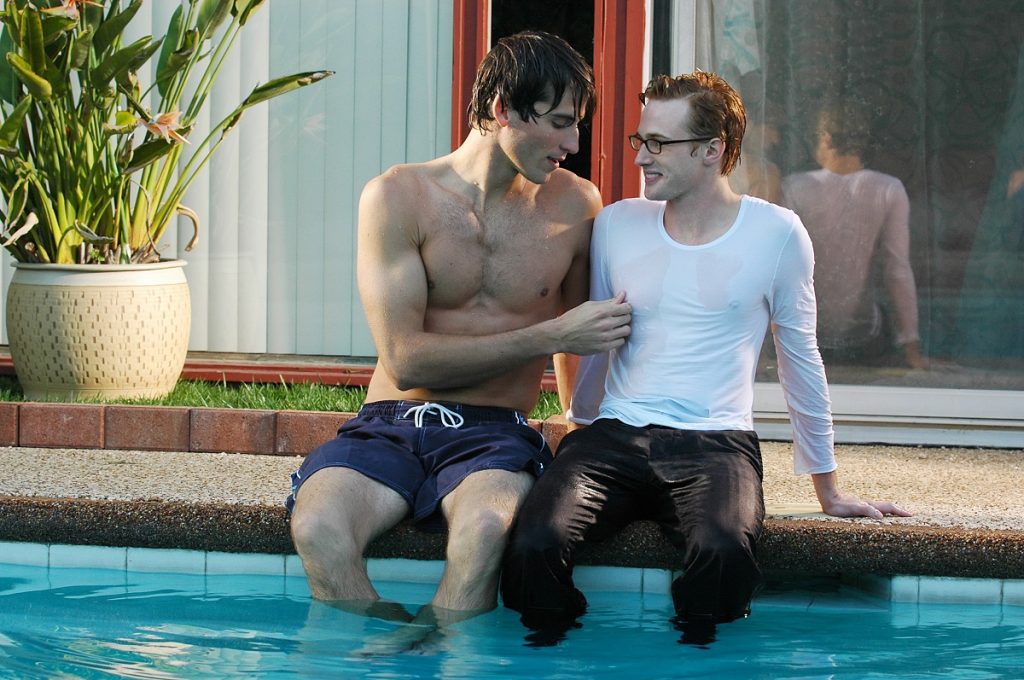 Another Gay Movie: 15-Year Anniversary Director’s Cut
Another Gay Movie has become a raunchy comedy classic – and this new 15-Year Anniversary Director’s Cut is more outrageous than ever! The film follows a group of insanely horny gay high school boys who are determined to lose their virginity by any means necessary. With bright colors, over-the-top humor and a cast stacked with hot guys and comedy ringers, director Todd Stephens (Edge of Seventeen) skewers the wildly popular teen movie craze of the late ’90s and early 2000s and gives this delicious parody a decidedly gay twist. The film is available now on-demand. Make sure to pick up the DVD as well. It’s packed with interviews, audio commentaries, original audition footage, a staged script reading and much, much more!

Bare
A provocative, sexy and visually-stunning new documentary, Bare follows acclaimed Belgian choreographer Thierry Smits through the process of creating Anima Ardens, his newest stage production featuring eleven completely naked male performers. In between breathtaking dance sequences, Bare reveals the artistic collaboration and conflict between choreographer and company as they build an avant-garde piece steeped in dark, primal energy and ritual. Together, they address questions of body politics, gender, censorship and a variety of taboo subjects. The film also traces the arduous process of auditioning, rehearsing and opening a new dance piece – which is apparently even harder when you’re totally nude! 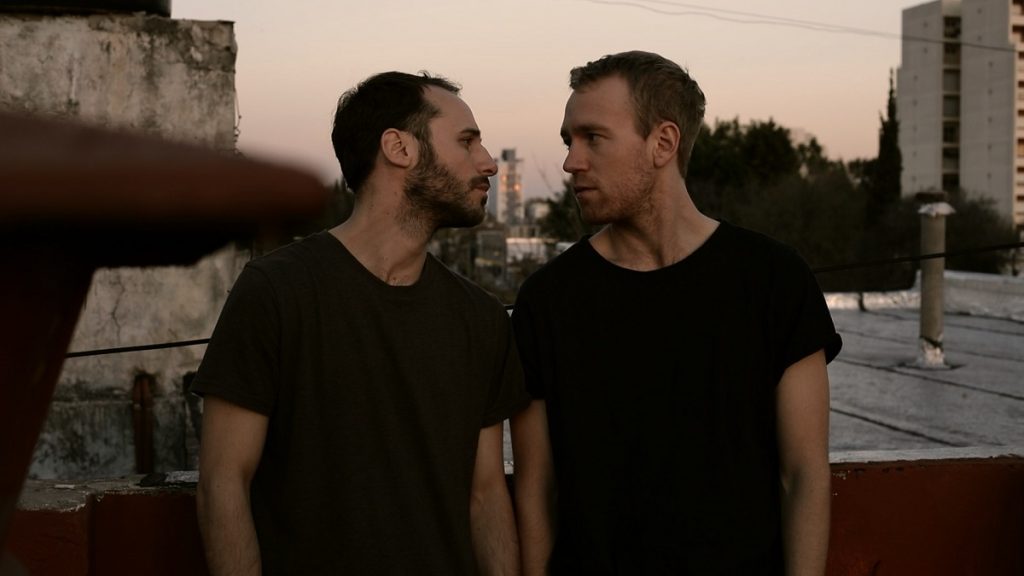 The Blonde One
In the suburbs of Buenos Aires, Gabriel (Gaston Re) has just moved in with his colleague, Juan (Alfonso Barón). Shy and reserved, Gabriel is reluctant to follow Juan’s wandering hands and meaningful looks. With a revolving door of beauties streaming out of Juan’s bedroom, his machismo seems firmly in place. However, the attraction between the two men is undeniable. What starts out as a sexual relationship based on convenience of location soon develops into the engrossing evolution of a tender and intimate relationship. But, as reality begins to set in on their homemaking fantasy, something needs to give… or does it? Poignant and incredibly sexy, The Blonde One is one of the hottest gay movies of the past few years. 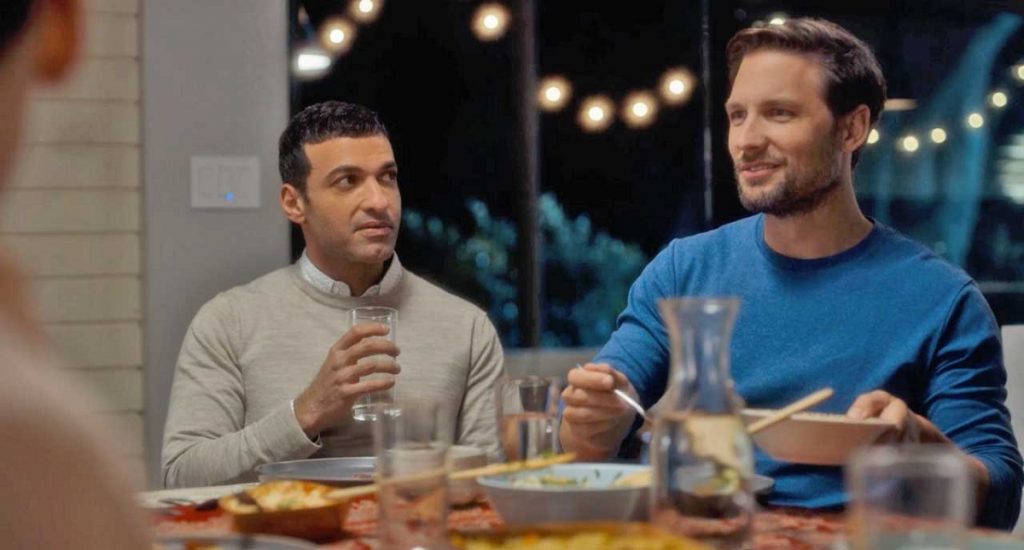 Breaking Fast
Set against the twinkling lights of West Hollywood, Breaking Fast is a delightful new culture-clash romantic comedy that follows Mo (Haaz Sleiman), a practicing Muslim still reeling from heartbreak. When an All-American guy named Kal (Michael Cassidy) offers to join him in his nightly Iftars – the traditional meal eaten by Muslims during Ramadan – meal after meal, the two start to discover they have more in common than meets the eye. The two soon start to fall in love over all the things that they have in common and – more importantly – the things they don’t. A major crowd-pleaser at various LGBTQ+ film festivals around the globe, Film Threat summed it up by calling Breaking Fast “as near a perfect film as one can ask for.” 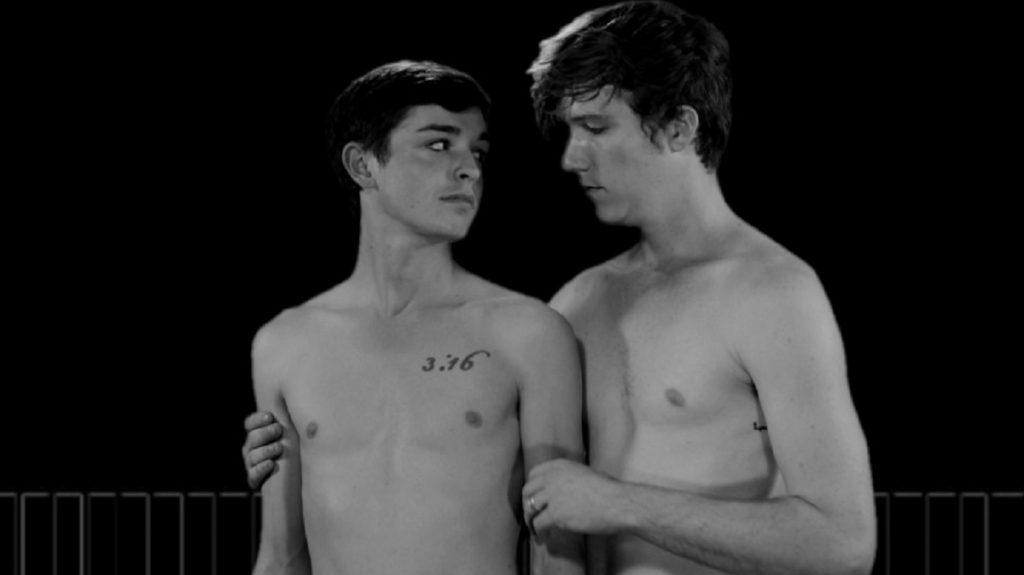 Dancing on the Dark Side of the Moon
A futuristic lighthouse floats through dark space. Aboard is a “Spirit Guide” and his two “Younglings.” These three otherworldly beings are in the middle of an unusual journey. When Alexi asks about life on Earth, the Spirit Guide is compelled to show him what it’s like. Inspired by The Twilight Zone and the films of David Lynch, Dancing on the Dark Side of the Moon is a low-budget erotic fantasia from Babaloo Studios, the same company behind the films Necro-Mancing Dennis, Deadly Screams of a Naked Siren and Counselor Week at Camp Liberty. Like their other works, this film is packed to the brim with gorgeous naked twinks in a variety of explicit sexual situations. Viewer discretion is strongly advised! 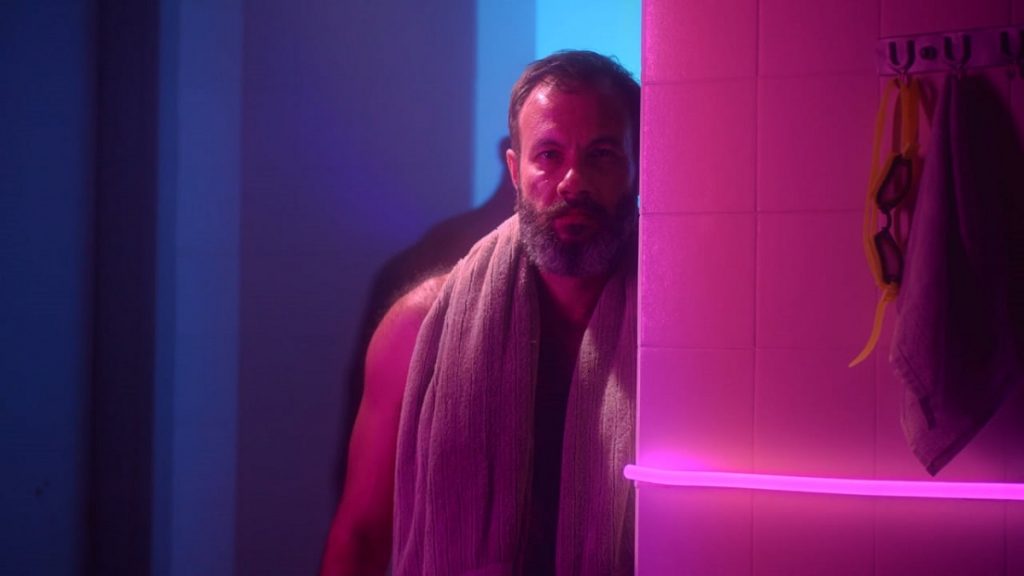 Dry Wind
A gloriously erotic new film from Brazilian director Daniel Nolasco, Dry Wind follows factory worker Sandro (Leandro Faria Lelo) as he escapes his rural boredom via secret trysts with his co-worker Ricardo (Allan Jacinto Santana) – and through elaborate sexual fantasies that would make Tom of Finland himself blush. Though his sex life is in full swing, Sandro shies away from any emotional attachment, preferring to imagine worlds of anonymity, leather and unbridled fetish-play. When a new arrival to town (Rafael Teóphilo) – a certified hunk straight out of Sandro’s dreams – sets his sights on Ricardo, Sandro finds himself brimming with jealousy and fearing exclusion from the kind of romance he never thought he wanted. 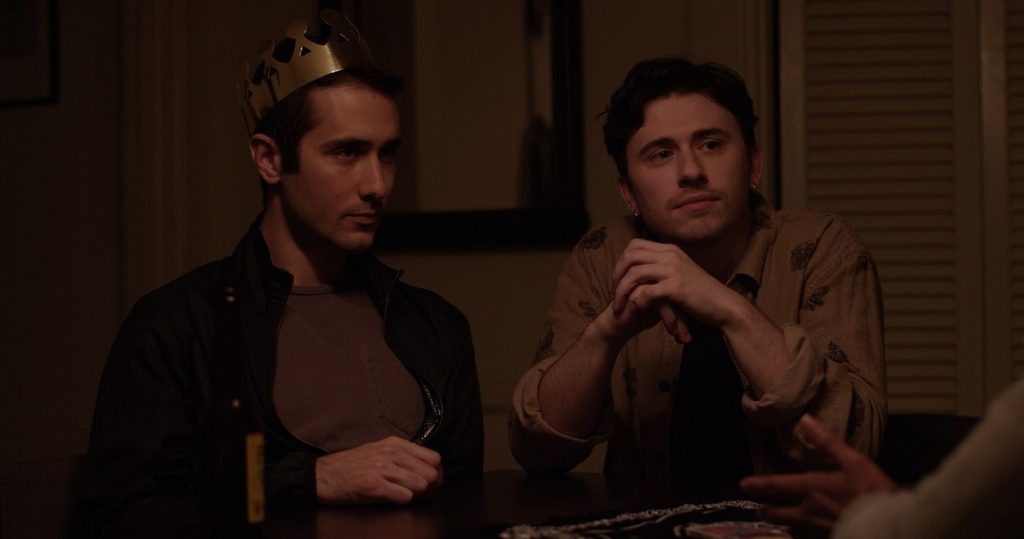 Here Comes Your Man
What begins as a simple hookup blossoms into an unlikely romance between two young men in this charming and deeply sexy gay romantic comedy. When Jordan (Calvin Picou) and Aaron (Jason Alan Clark) meet in person after exchanging pics, their initial tryst is fraught with the kind awkward tension that suggests they might not be a perfect match. On top of that, Aaron is unaware that Jordan is, for all intents and purposes, “straight.” Confused about his sexuality, Jordan blocks Aaron’s number. When they run into each other weeks later, the truth comes out… and they find something undeniable about their strange romantic chemistry. But turning a one-night stand into “happily ever after” is not quite as easy as it seems. 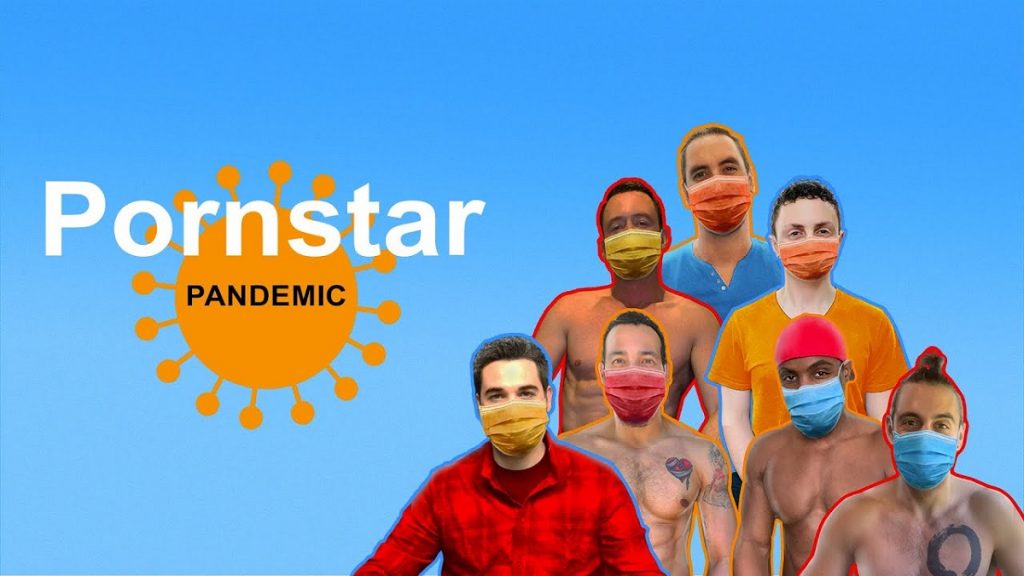 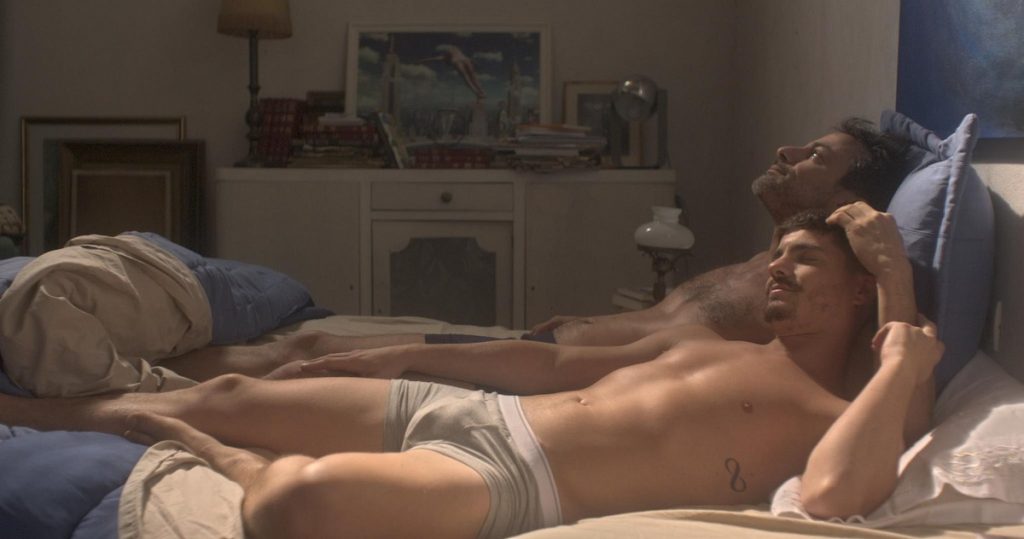 A Skeleton in the Closet
When Manuel (Facundo Gambande) returns to his hometown on the occasion of his parents’ wedding anniversary, he has a bit of an ulterior motive. He’s planning to ask for money so that he can move to Denmark with his boyfriend. The last time he saw his family, he came out of the closet – and things have been tense ever since. When his boyfriend suddenly dumps him, Manuel finds himself diving head-first into an existential crisis. Now more in need of his family’s love and support than ever, an unexpected opportunity to reconnect presents itself. Featuring a terrifically endearing lead performance, A Skeleton in the Closet is a tender and heartfelt Argentinian family comedy-drama that you don’t want to miss. 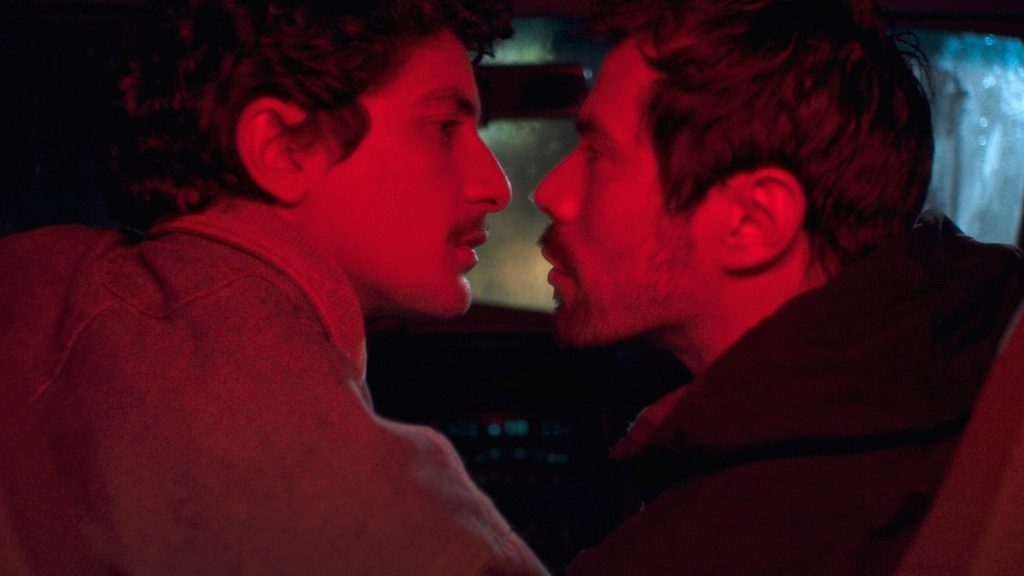 The Strong Ones
Based on an original short film, which won the Teddy Award at the Berlin International Film Festival, The Strong Ones follows the romantic saga of two beautiful Chilean men on different life paths. Lucas (Samuel Gonzalez), an architect, travels to visit his sister, who lives in a remote town in Southern Chile. Beside the ocean, shrouded in the wintery mist, he meets Antonio (Antonio Altamirano), a boatswain on a local fishing boat. When an intense romance blossoms between them, their strength, independence, and adulthood become immovable, just like the ebb and flow of the tide. Confidently directed by Omar Zúñiga Hidalgo, The Strong Ones took home both the Audience Award and Grand Jury Prize at Outfest last year. 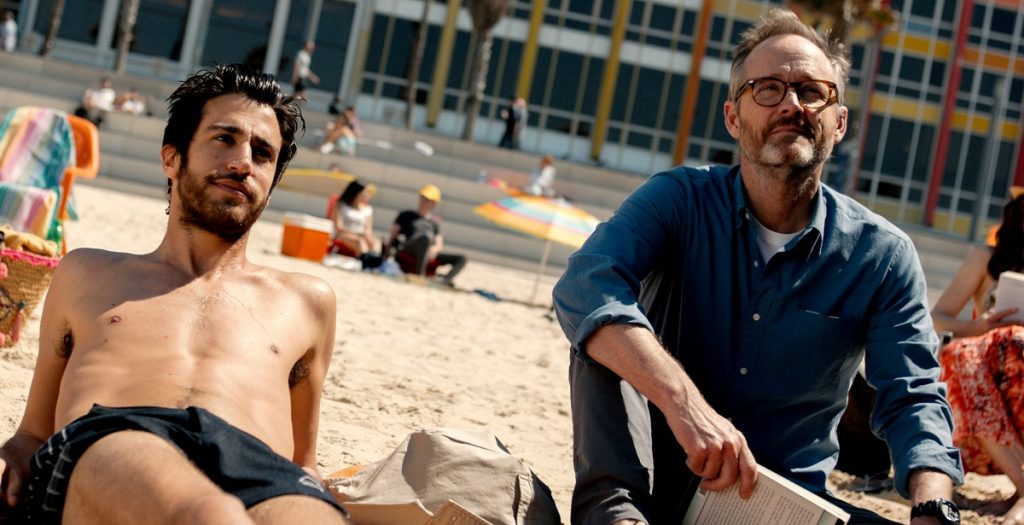 Sublet
Michael (John Benjamin Hickey) is a travel columnist for The New York Times who reluctantly goes on a trip to Tel Aviv to write an article after suffering a tragedy. Leaving behind some unresolved relationship troubles with his husband, Michael just wants to do his research and go home. But when he sublets an apartment from Tomer (Niv Nissim), an attractive young film student, he suddenly finds himself drawn into the life of the city. The intense bond he forms with this casually seductive younger man ends up transforming both their lives in unexpected ways. Sexy, charming and ultimately life-affirming, Sublet is the newest indie gem from acclaimed director Eytan Fox (the filmmaker behind Yossi and Jagger). 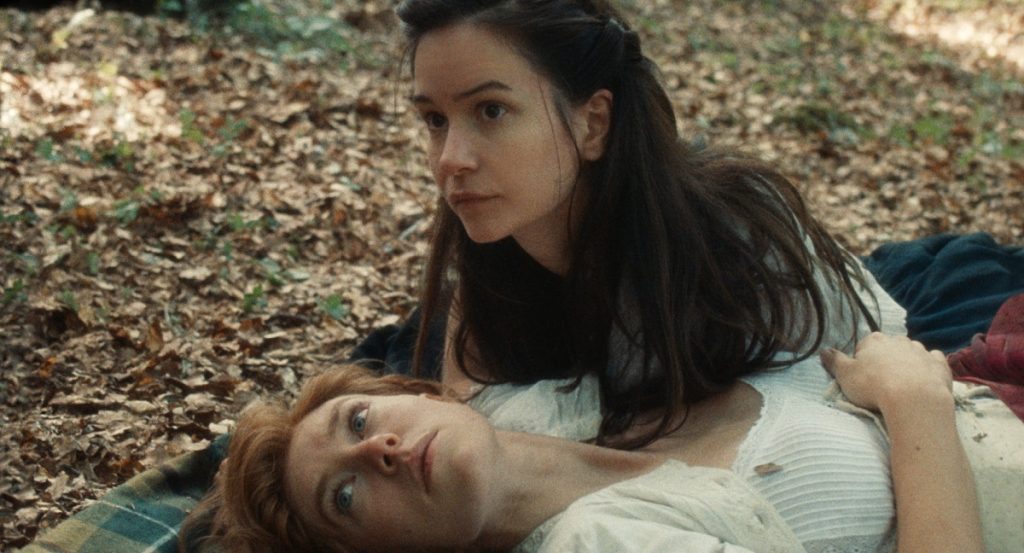 The World to Come
In this powerful 19th century romance set in the American Northeast, Abigail (Katherine Waterston), a farmer’s wife, and her new neighbor Tallie (Vanessa Kirby) find themselves irrevocably drawn to each other. A grieving Abigail tends to her withdrawn husband Dyer (Casey Affleck) as free-spirit Tallie bristles at the jealous control of her husband Finney (Christopher Abbott), when together their intimacy begins to fill a void in each other’s lives they never knew existed. Directed by Mona Fastvold, The World to Come is a gorgeous and incredibly well-acted LGBTQ+ period piece that explores how isolation is overcome by the intensity of human connection.