The Films of Marco Berger

“I let others talk about doing controversial projects that they think will end up at Cannes. Whereas I think my work is always talking about love. Love between men. And I’m going to keep doing it until I die.” – Marco Berger

Since his first feature film, Plan B, debuted on the international film festival circuit back in 2009, Argentina-based writer-director Marco Berger has been one of our favorite filmmakers. Mixing homoerotic desire, suspense and dramatic tension, he’s created an impressive collection of slow-burn gay indie gems that reward patient and attentive viewers. With the recent release of his film Young Hunter – available now on DVD and VOD at TLAgay – we wanted to take a look back through his resume and spotlight some of our top picks. Though not all of his work is currently available, we linked the titles below so that you can check them out on our website, place your order and take a deep dive into his alluring cinematic world.

Click here to check out the full selection of available films. 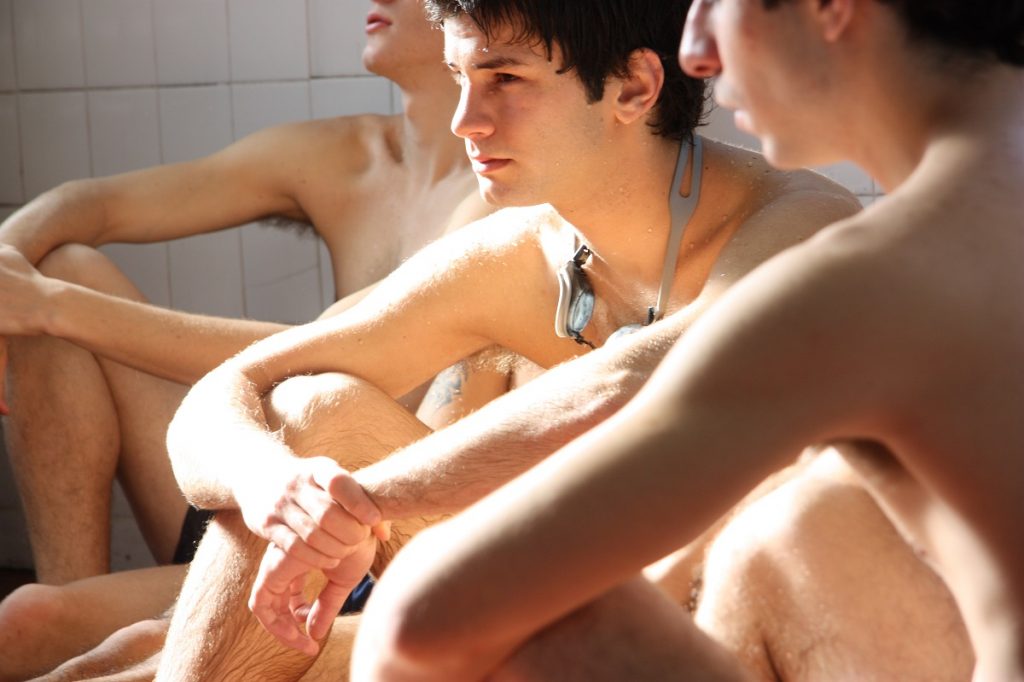 Absent
Knowingly, even aggressively sexual, 16-year-old Martin (Javier De Pietro) locks his seductive sights on Sebastian (Carlos Echevarria), his recently engaged, 30-something swimming instructor. Faking an injury, Martin eventually tricks his teacher into letting him spend the night at his apartment. As Sebastian begins to realize the possible sexual interest on the part of his student, he is conflicted. He is dismissive, but his curiosity is piqued by the boy’s overt advances. An extraordinary event soon forces the increasingly troubled Sebastian to question his own feelings for young Martin. Absent is not a simple boy-meets-boy drama. It’s a taut drama of repressed passion, guilt and regret. The film won the coveted Teddy Award for Best Feature Film at the Berlin Film Festival when it debuted in 2011. 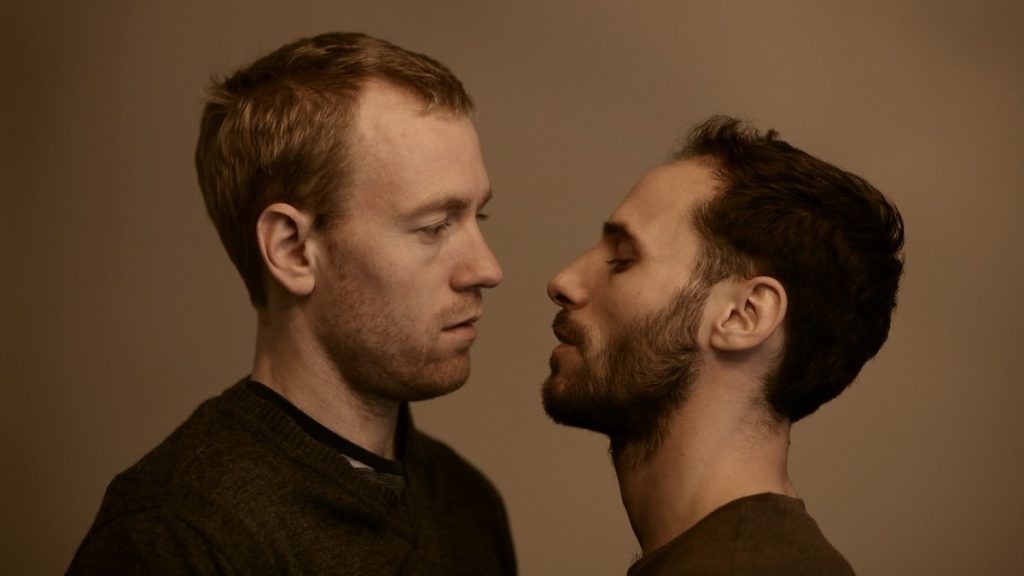 The Blonde One
In the suburbs of Buenos Aires, Gabriel (Gaston Re) has just moved in with his colleague, Juan (Alfonso Barón). Shy and reserved, Gabriel is reluctant to follow Juan’s wandering hands and meaningful looks. With a revolving door of beauties streaming out of Juan’s bedroom, his machismo seems firmly in place. However, the attraction between the two men is undeniable. What starts out as a sexual relationship based on convenience of location soon develops into the engrossing evolution of a tender and intimate relationship, which is as sweet as it is heartbreaking. But, as reality begins to set in on their homemaking fantasy, something needs to give… or does it? Poignant, beautifully-crafted and incredibly sexy, The Blonde One is one of the hottest gay movies of the past few years. 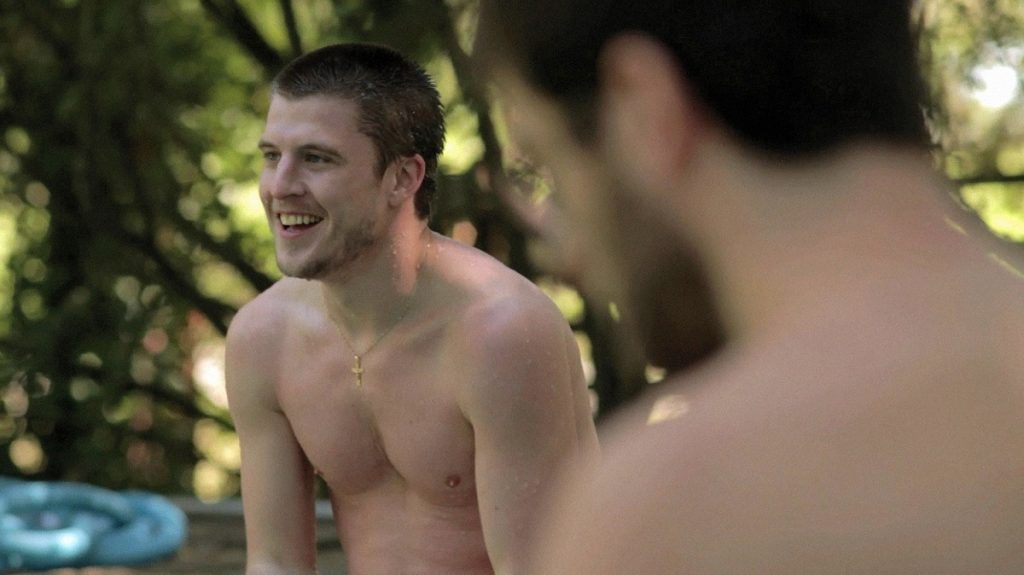 Hawaii
Sexual tension practically spills off the screen in this sweaty, titillating romance originally released in 2013. Berger’s Hawaii follows Martin and Eugenio (Manuel Vignau and Mateo Chiarino), two former childhood friends who reunite during a hot summer in the Argentinean countryside. As they work together to restore Eugenio’s summer home, a game of power and desire ensues – compelling the two buddies to grapple with their sexual attraction and reconsider their relationship. With gorgeous cinematography, a lush setting and compelling lead performances, Hawaii is an intimate and unique slow-moving character study that pushes past social boundaries. Lead actors Vignau and Chiarino make the underlying sexual tension palpable from start to finish. 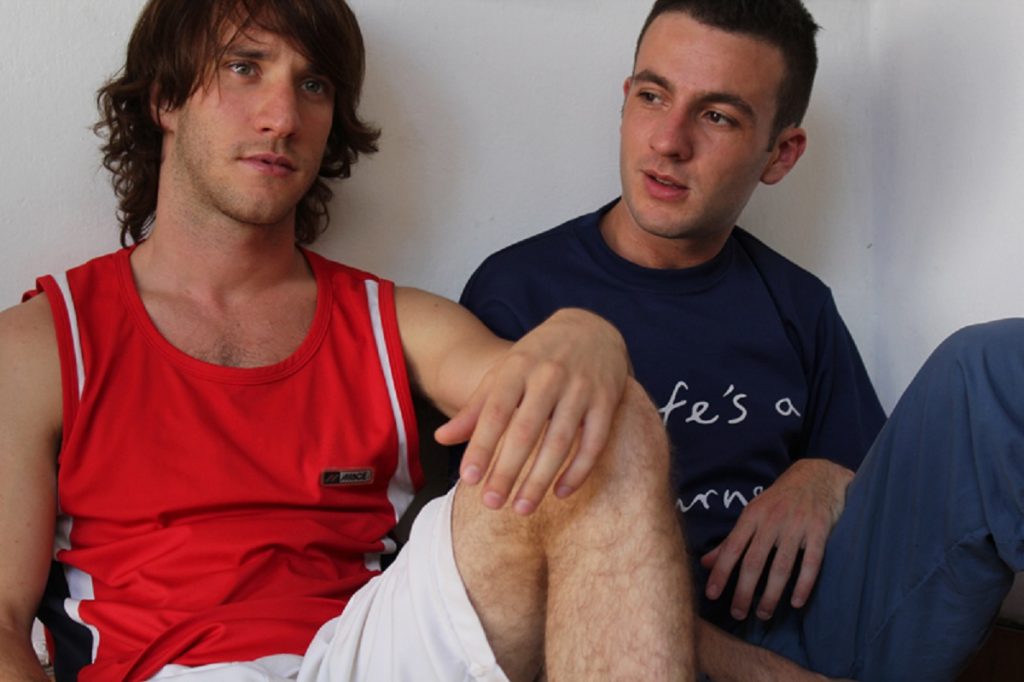 Sexual Tension: Volatile
Berger’s pulsating collection of short films weaves together six scintillating experiences of men in various forms of erotic bonding. A young man feels the adrenaline rush of his sexy tattoo artist’s needle in Ari while in The Cousin, a cute boy has a taboo attraction for a family member. Two “straight” buddies literally show each other how to make love to a woman in The Other One, while a man with Broken Arms receives a sensual sponge bath from a male nurse. Love is questionable when a broken shower brings a married man and an innkeeper together and in Workout two muscular men begin to explore each other’s chiseled bodies. Voyeuristic pleasures await you as the camera penetrates and caresses the men’s bodies while exploring the mysterious and electrifying nature of male intimacy. 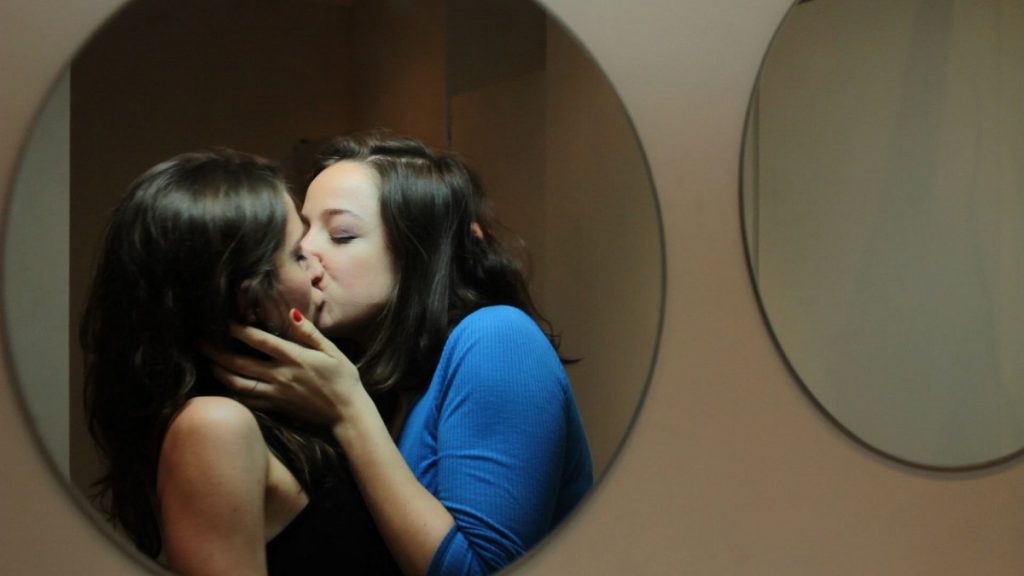 Sexual Tension: Violetas
Berger and co-writer/director Marcelo Mónaco followed up Sexual Tension: Volatile with another collection of shorts, this time for the ladies. Exploring the art of seduction between two women – through six very different, incredibly sexy stories – Sexual Tension: Violetas is an assured underground lesbian classic. Two guests of a hostel become roommates (and more), a keen shop assistant helps a woman uncertain about what dress to buy, great passion starts to develop between girls during a picnic, a few women get a little carried away whilst discussing films at a restaurant, and two high-class escorts discover that they are attracted to each other when they are in bed with a client. Never less than exciting and passionate, this effortlessly cool collection offers up  six unforgettable stories of lesbian attraction. 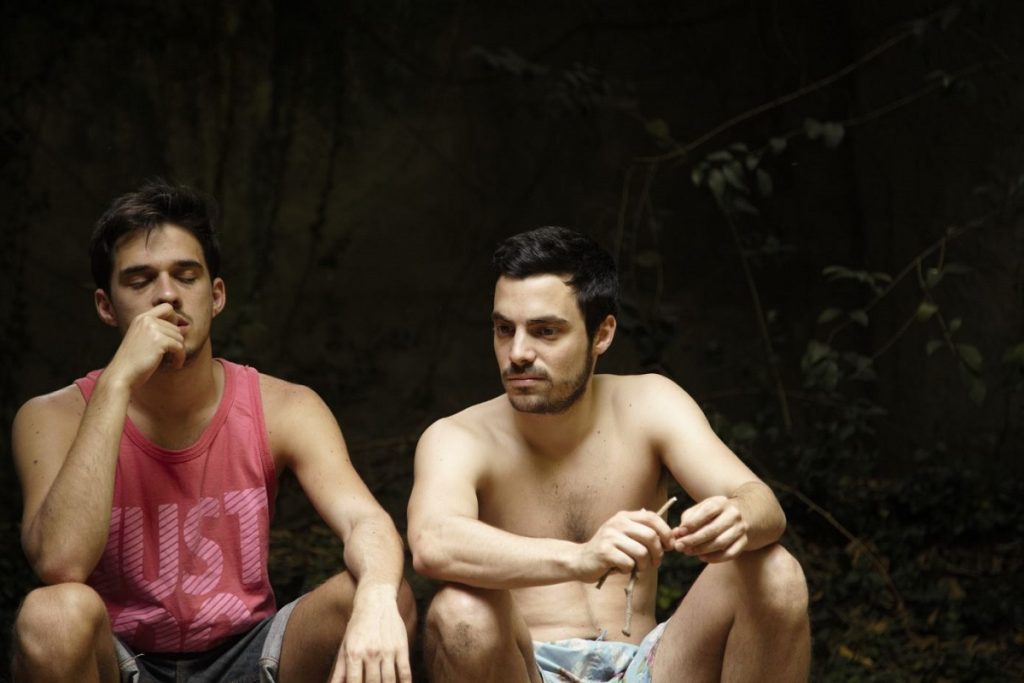 Taekwondo
In a gorgeous country house in Buenos Aires, Fernando (Lucas Papa) gathers his buddies for a boys-only vacation. Free from work, responsibilities and their girlfriends, this close-knit gang of bros kick back by the pool, sunning their impeccably toned bodies and sharing drug-fueled stories of sexual conquests. Fernando has also invited a newcomer named Germán (Gabriel Epstein), a friend from his taekwondo class, who neglects to tell the group that he’s gay. As the lazy summer days disappear, the connection between Fernando and Germán grows and slowly the boundaries of their relationship begin to blur. A veritable masterclass in will-they-won’t-they suspense, this gloriously protracted, beautifully nuanced tease is both wantonly titillating and disarmingly sweet – luxuriating in the eroticism and lingering over the semi-clad bodies with unapologetic gay abandon. 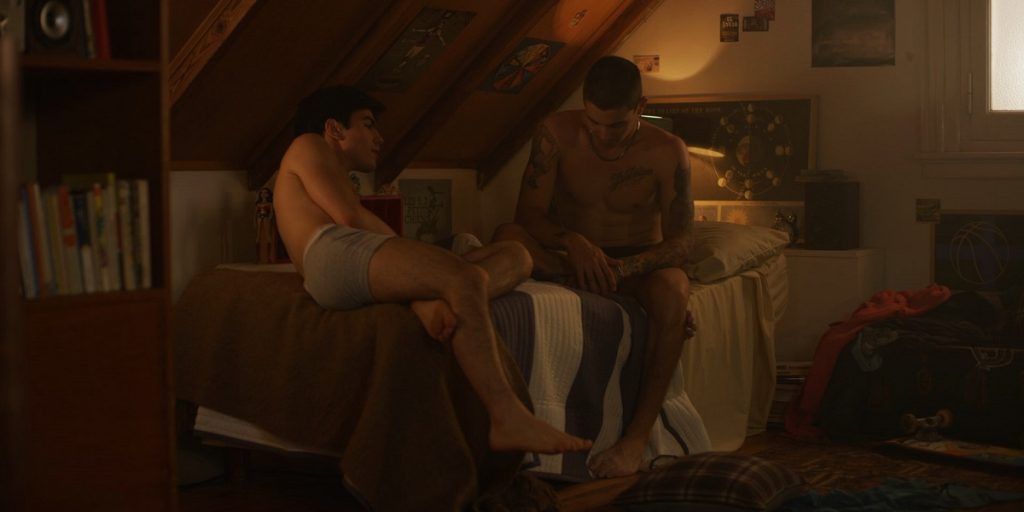 Young Hunter
Berger’s most recently released film is a tense and thought-provoking thriller. Young Hunter follows Ezequiel (Juan Pablo Cestaro), a fifteen-year-old boy on the cusp of his sexual awakening. While his parents are away, he meets a handsome, slightly older guy named Mono (Lautaro Rodríguez) and quickly starts a relationship. Mono invites him to his cousin’s villa to spend a weekend together, but while returning from the trip Mono seemingly disappears, no longer responding to texts. Ezequiel is surprised and confused until Chino (Juan Barberini), Mono’s cousin, sends him a hidden camera video of their sexual encounter, blackmailing him into participating in an increasingly dangerous criminal conspiracy. Against his own will, Ezequiel must decide whether to come clean or turn from prey to hunter.

Once again, click here to explore the exciting work of Marco Berger.