Halloween Highlights: 50 Queer Horror Flicks We Think Are Worth a Look - Part 2

If you’re the same kind of scare-seeking movie geek that I am, you’ll know that October is a time to light a few candles, turn down the lights, open up the windows to let in that fresh autumn breeze… before really setting the mood with some seasonally-appropriate scary movies! This month, I’m sure we’ll revisit some tried and true classics (think The Exorcist, The Shining, Rosemary’s Baby, the original Halloween). I have plans to finally bust open the Criterion Collection edition of Don’t Look Now I bought forever ago. Being authorities on all things gay-cinema, though, we at TLAgay.com wanted to put in a good word for some queer movies that don’t make the usual ranked horror lists. We came up with a selection of 50 different gay titles that are either direct horror movies or horror adjacent (suspense, mysteries, thrillers). Below, you’ll find Part 2 or our on-going list, featuring second set of ten movies – in alphabetical order – with new lists appearing each Monday in October. Keep checking back each week for the latest additions! 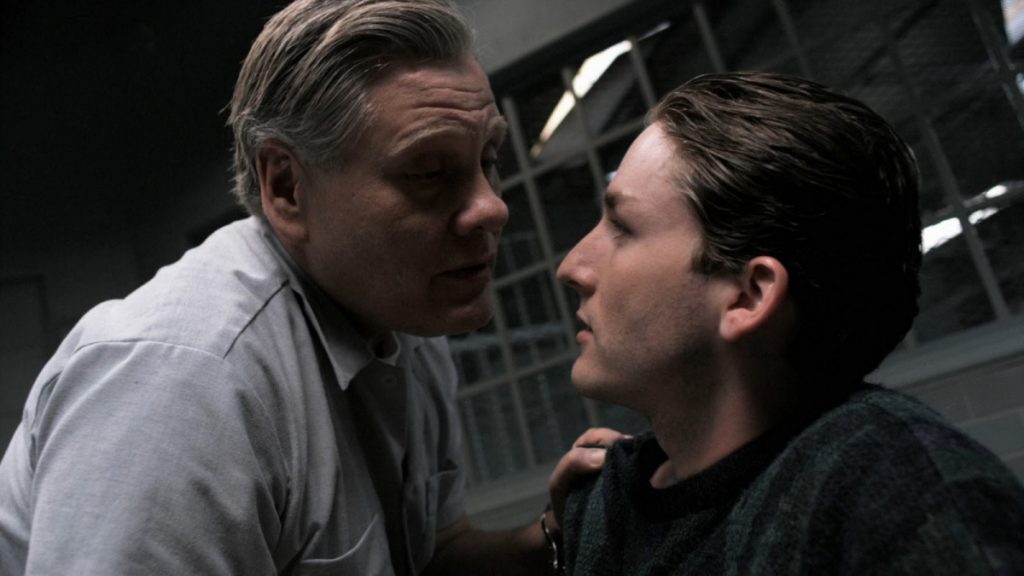 In 1980, John Wayne Gacy (William Forsythe giving a brave, deeply unflattering performance) was convicted of the murder of 33 boys and young men – many of whom he buried beneath his suburban Chicago home – and sentenced to death row. Thirteen years later, ambitious criminology student Jason Moss (played, coincidentally, by Jesse Moss of Tucker and Dale vs. Evil) began a bizarre correspondence with the serial killer by posing as a vulnerable gay teen. Or… was he posing? As the two get to know one another, a strange and unsettling psycho-sexual relationship begins to develop and it’s hard to tell where the posturing ends and the real urges and desires (both sexual and murderous) begin. Dear Mr. Gacy tells a chilling, little-known true story based on the Jason Moss’s own best selling novel that detailed one 18-year-old’s terrifying relationship with one of the most notorious serial killers in American history. 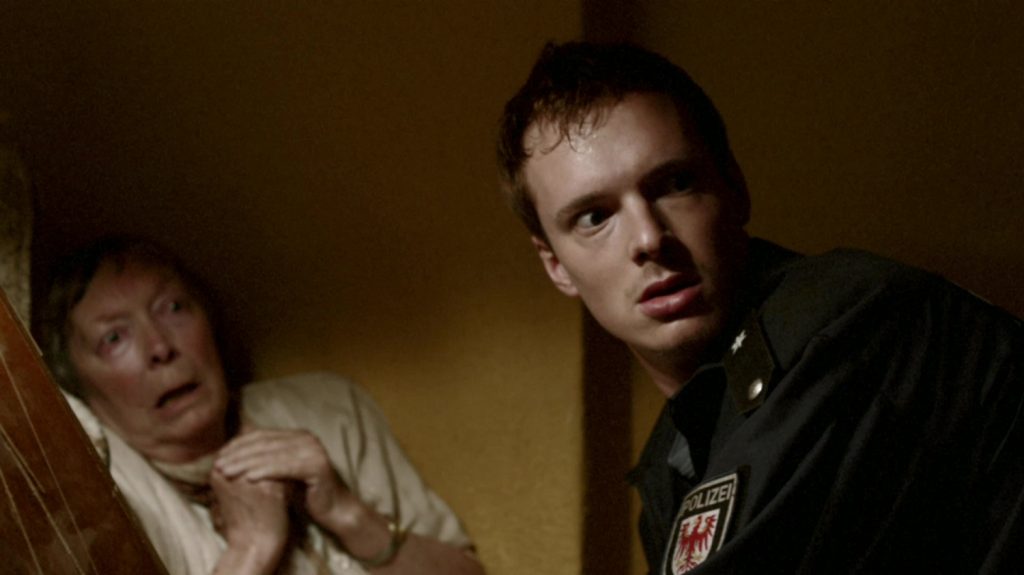 Jakob (Michel Diercks) is a policeman in a village deep in the woods, where little happens… until the arrival of a mysterious wolf that is causing havoc. Working the night shift, Jakob is tracking the wolf, only to discover that the lupine lurker is actually a man clad only in lipstick and a ladies’ slip – and toting a samurai sword that he uses to lop off the heads of the townspeople, including Jakob’s tormentors. Jakob and the transvestite samurai seem to share a bond, and as the night gets darker, events get even weirder. Unlike any other horror film you’re likely to see, Der Samurai is a German mind-bender about shape-shifting cross-dressers, bloody decapitations, repressed sexual desires and small town life. It’s a surreal mix of dark comedy and eerie creep-out fun that recalls David Lynch and pays homage to, while often improving upon, the synth-soundtrack-packed horror classics of the 1980s. 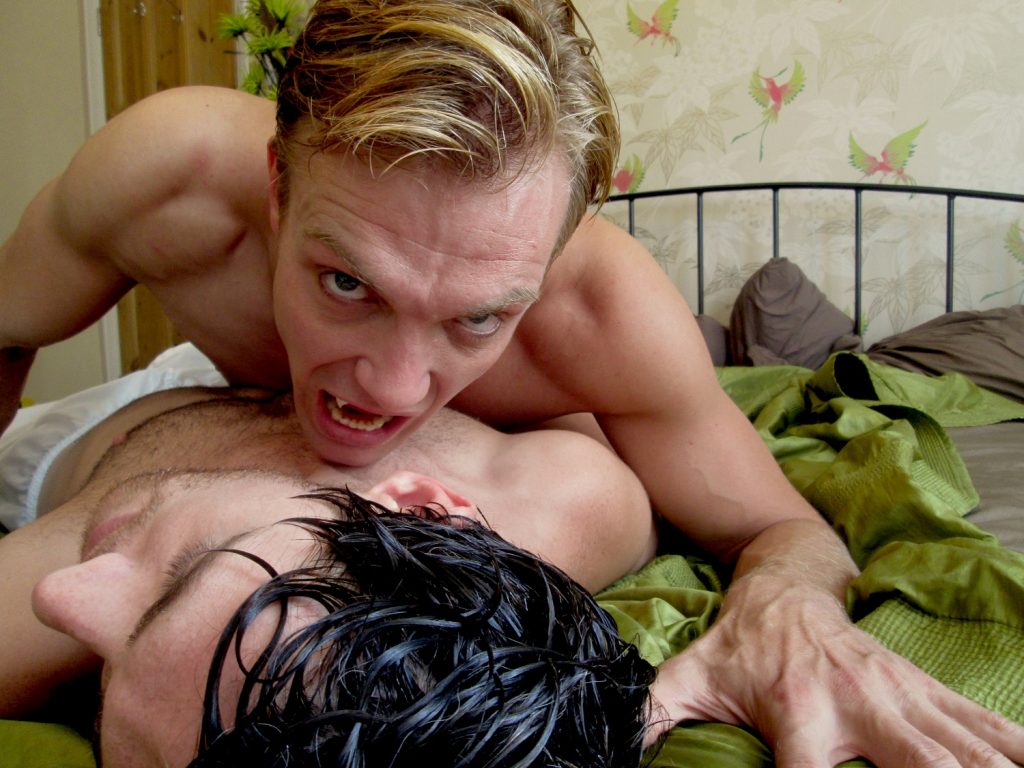 James and Andy (Emmett Friel and Darren Munn), a sexy gay couple, seem to have everything they ever dreamed of… but things are about to change. Andy loses his job and they take in a handsome stranger named Sebastian (Chris Ellis-Stanton). Nightmares come to life as Andy realizes that Sebastian is hiding a dark secret. Could Sebastian be the killer stalking the streets of their neighborhood? Yes. Yes he could. And… also… (spoiler alert)… he’s a vampire. While it’s maybe not to most skillfully directed (or acted) movie in the bunch, Drink Me has other… hmmm, let’s call them charms… to recommend it. The three British leads, Emmett Friel, Darren Munn and Chris Ellis Stanton, are all very easy on the eyes and this movie is absolutely packed with graphic male nudity and explicit gay sex scenes. It’s sensual and erotic above all else (for better or worse). 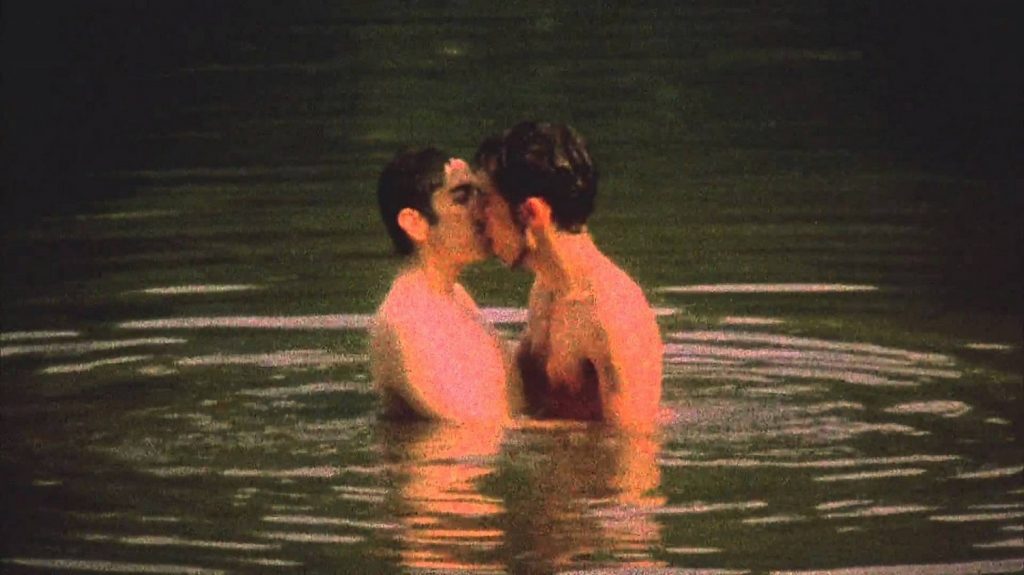 Eulogy for a Vampire

Speaking of vampires, here’s another one! And like Drink Me above, it’s another title where the premise may be more promising than the finished product. Director Patrick McGuinn (Sun Kissed, Queer as F**k: Bizarre Short Films) has brought us many films over the years, most dipping into the realm of horror or suspense. Here, he outdoes himself with a unique and original horror film – a tribute to the British Hammer Films of the past. In Eulogy for a Vampire, a handsome young drifter is found unconscious near a remote rural monastery inhabited by the mysterious Order of Pathicus. His strong sexuality unsettles the young monks. One by one, they unravel through their perverse obsession with the drifter, who seems to possess an inner knowledge about the monastery and its dark secrets. We totally love the idea of a seductive young dude sending a group of monks into a state of sexual confusion. That’s a premise that’s pretty hard to resist. 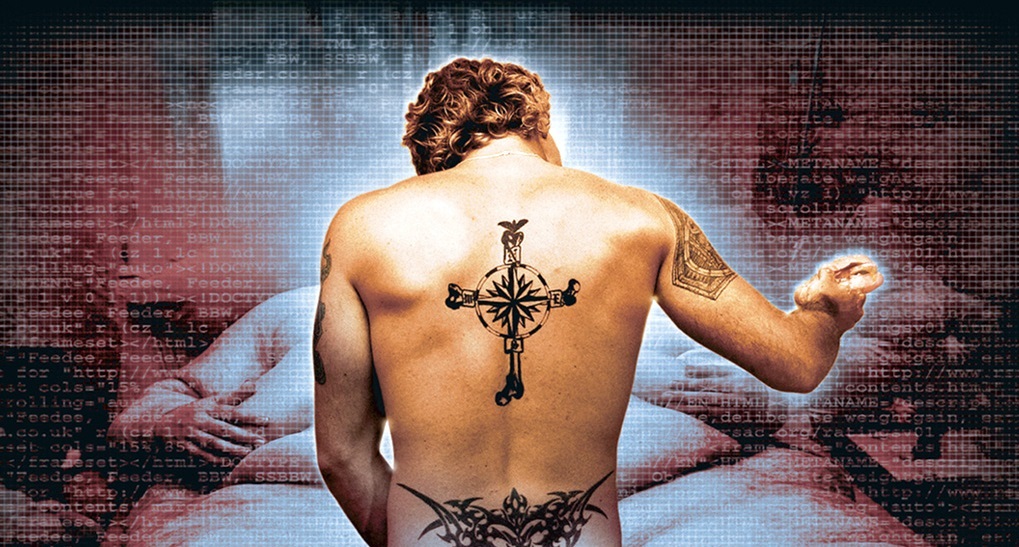 If you love to be grossed out, you’re in luck. This Aussie thriller follows a cop who specializes in investigating international sex crime rings. He soon locates a website devoted to the cult of “feeders” and “gainers”. On this site, enormously obese women are being fed massive food quantities and kept as willingly immobile shut-ins
by men obsessed with their girth. There’s also a gay couple as part of the parade of derelicts, with one partner being willingly eaten by the other (inspired by the real-life Armin Meiwes cannibal murder case). That’s right. Eaten. And what’s that cooking on the stove? It ain’t sausage! Feed is one of those “we dare you” kind of viewing experiences – a veritable roller coaster ride of potential audience trauma. A naked man pleasures himself in front of a 600-pound woman as she begs for the cheeseburgers he taunts her with. And we already mentioned the two gay cannibal enthusiasts, right? That’s all just in the first five minutes. 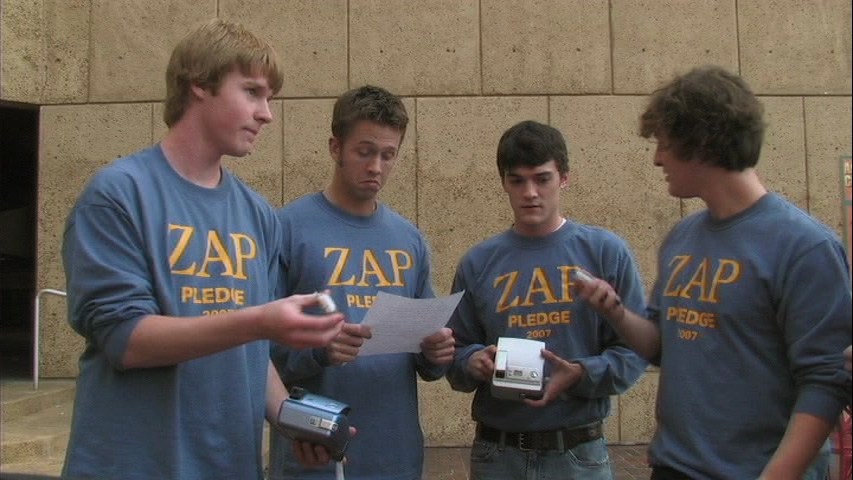 What starts out as a fun and adventurous fraternity pledge night turns nightmarish when a killer clown terrorizes the brothers and pledges of Zeta Alpha Rho, killing them off one-by-one! Locked down on a haunted gloomy island with no escape route, the ZAP pledges mysteriously disappear as the maniacal clown reaps personal revenge on the unsuspecting frat boys. Homophobia abounds as frat pledge Jack Jones (Tyler Farrell) must quickly formulate a plan to stop the devious clown, save his fraternity brothers… and find the courage to come out of the closet before the sun rises on this doomed “Hell Island.” There have been countless “Sorority Massacre” movies since the late ’70s/early ’80s. It’s about time that frat boys got in on the gory action. Fraternity Massacre at Hell Island is an intentionally campy, straight-to-video lark with little in the way of actual scares, but it’s pretty hard to resist the corny charms of horror flick about scorching hot closet-cases failing to keep their simmering homoerotic urges a secret. You’ll find plenty of hot, college-boy flesh on display before it’s sliced and diced. 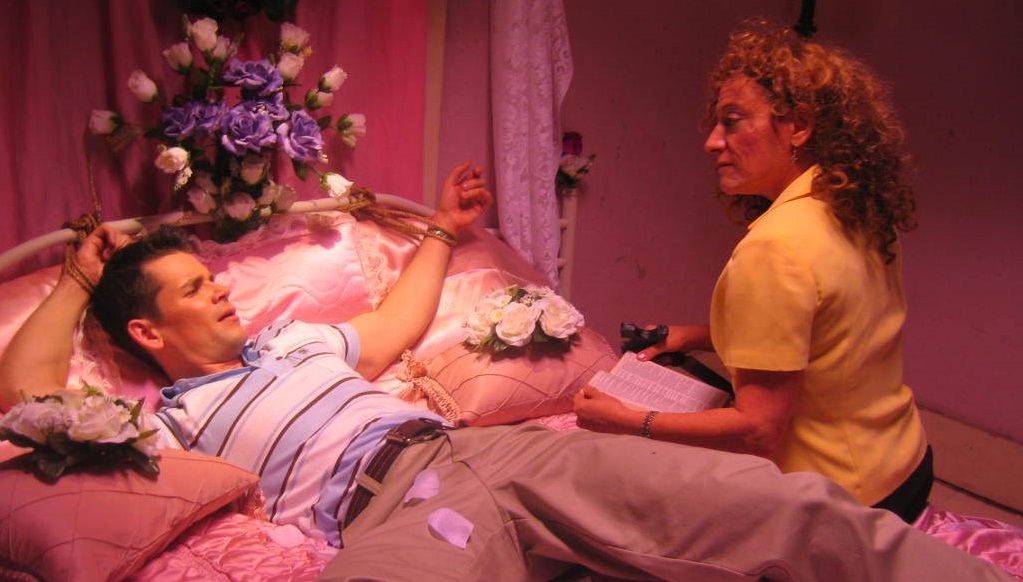 The Gay Bed & Breakfast of Terror

There are unspeakable horrors to be found at the Sahara Salvation Bed and Breakfast and not all of them involve the suspiciously meaty mincemeat muffins offered to guests when they check in. Totally tongue-in-cheek, this funny and sexy offering is a goofy little gem. On the eve of a monster circuit party, five wary couples arrive at this dusty and rundown bed and breakfast that has hopefully seen better days. Besides the muffins, our guests are greeted by the hostesses Helen and her most peculiar daughter Luella. Helen, unfortunately, hates gay people. She enjoys killing queers for sport. Her daughter has lesbian tendencies and when they surface the guests better hide the cutlery. Her son is some kind of wild monster who simply likes to eat people. Straight or gay? it’s not important! Just stay the fuck out of this B&B! The Gay Bed & Breakfast of Terror features a stunning selection of buff male flesh, plenty of belly laughs and loads of bloody, mutilated guests. 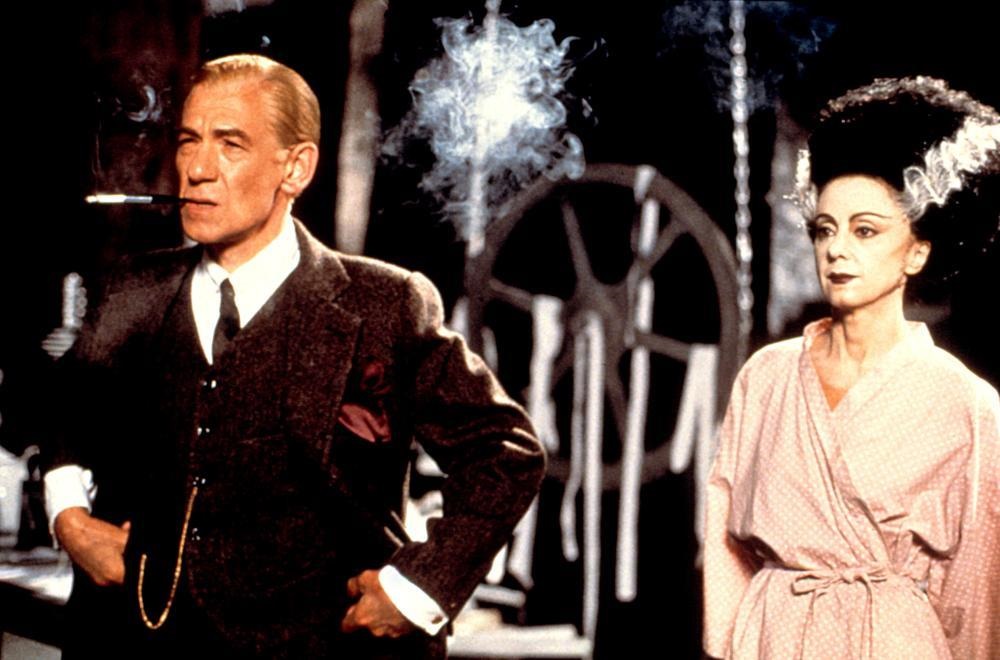 Well this one is certainly a change of pace (we’re going alphabetical here, so please excuse the lack of a proper segue). In a performance that is nothing short of brilliant, Sir Ian McKellen stars as gay film director James Whale in this moving, poetic adaptation of Christopher Bram‘s novel “Father of Frankenstein.” The story ostensibly follows the friendship between Whale – in his early 60s and suffering the effects of a stroke – and his handsome straight gardener (Brendan Fraser at the height of his hunk-dom); but at the core of this lyrical tale is a study of desire and self-determination. In the 1930s, Whale made a handful of Hollywood classics (including Frankenstein); it’s now 1957, and he is no longer able to live his life on his terms. Knowing that Whale was found dead in his swimming pool, the filmmakers have concocted a probable scenario which ends in a cynical pièce de résistance. Bringing compassion and elegance to Whale, McKellen‘s portrayal is so rich in nuance and shading that he makes you forget it’s acting. Fraser is excellent as the ex-Marine who captures Whale’s heart and, in turn, respect. Their bond is poignantly resilient. Director Bill Condon (who got his start in more traditional horror) tells this story with power, grace and heart. 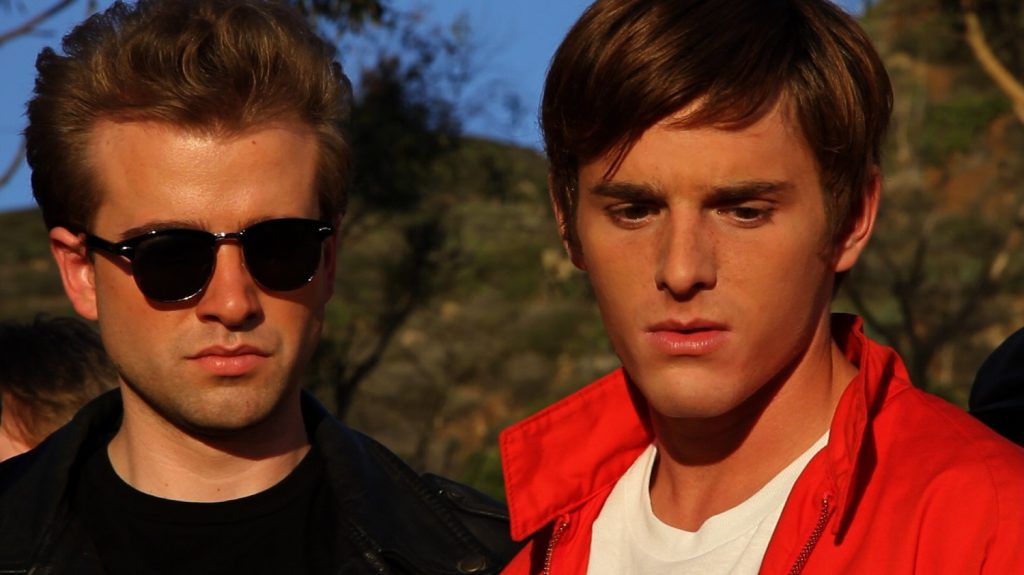 I Was a Teenage Werebear (c) New Rebellion Entertainment

I Was a Teenage Werebear

Sean Paul Lockhart stars as Ricky – a cute, Letterman jacket-wearing 1950s schoolboy who isn’t quite content getting into beach-side heavy petting with “girlfriend” Peggy Lou (scene-stealer Gabby West). He secretly has his eyes on Talon (Anton Troy), the school’s greaser bad-boy! Little does Ricky know that Talon and his fellow leather buddies hide a secret of their own: they are werebears! They may look like cute teen boys, but they can turn into bulky, hairy, bearded beasts in the blink of an eye. With gorgeous twink flesh on display, non-stop homoerotic action, hysterically funny supporting performances from Insidious series star Lin Shaye (as a gay-friendly clairvoyant) and writer/director Tim Sullivan himself (as a randy coach with a thing for his budding young charges) and numerous over-the-top musical numbers, I Was a Teenage Werebear is a delightfully campy must-see. A short film, it runs roughly 30 minutes, but the DVD is packed with rare, completely exclusive special features – including promo spots, trailers, deleted scenes, music videos, behind-the-scenes docs and more! 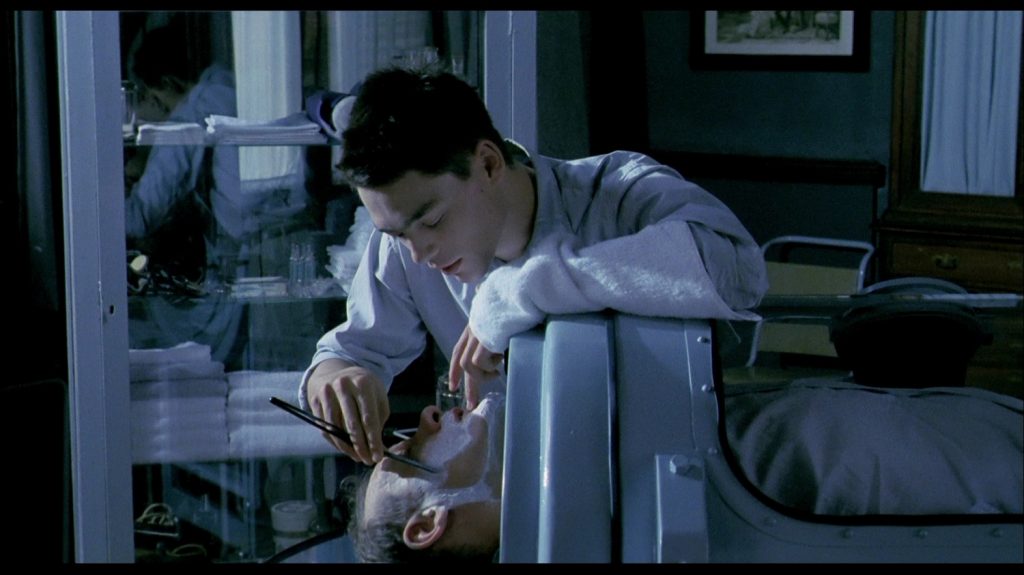 In a Glass Cage

Although definitely not for the squeamish, this sexually bizarre and violent thriller is a real find for those aficionados of no–holds–barred horror. Set a few years after WWII, the story concerns a former Nazi doctor and child molester who, because of an accident, is confined to an iron lung. The tormentor becomes the tormented after a mysterious young man, employed to be the paralyzed man’s nurse, is instead bent on revenge. Mixing the style of Diva with the graphic sadomasochism of Pasolini’s Salò, or the 120 Days of Sodom, the film treads on ideas rarely ventured in commercial films. An uncompromising psycho-sexual drama that is erotic, painful and terrifying, In a Glass Cage has been haunting people’s dreams and waking nightmares since it was first released to great controversy back in 1986. This one is for brave viewers only.

That’s it for today! Check back in with us next week for Part 3 – and visit us at TLAgay.com for your gay-themed horror/Halloween entertainment-related needs!