He Loves Me
Director Konstantinos Menelaou‘s sexually explicit new relationship drama He Loves Me is an exploration of the unconventional nature of love and its ability to survive against the fear of loneliness, psychological traumas and the problems that come with life in the big city. The collapsing relationship shared by two men finds an outlet for escape on an isolated beach. Once there, they feel free to expose their deepest emotions. Their wounded relationship might not survive the vacation, but it’s certainly a glorious place to feel things out. Super-sexy lead actors Sanuye Shoteka and Hermes Pittakos are artists and performers who were a real-life couple at the time that He Loves Me was shot – and the script for the film was greatly influenced by their relationship.

Rift
Paying homage to classic art-house horror films like Robert Wise’s The Haunting and Nicolas Roeg’s Don’t Look Now, Rift is an enticing, well-acted and expertly-directed mystery-thriller from Iceland that will make the hairs on the back of your neck stand up. Gunnar (Björn Stefánsson) receives a strange phone call from his ex-boyfriend, Einar (Sigurður Þór Óskarsson), months after they parted ways. Einar sounds distraught, like he’s about to do something terrible to himself, so Gunnar drives to the secluded cabin where Einar is holed up and soon discovers there is more going on than he imagined. As the two come to terms with their broken relationship, some other person seems to be lurking outside the cabin, wanting to get inside. Eerie and stylishly crafted, Rift was a big hit at film fests – not just LGBT festivals, but general horror film festivals as well, where it has earned rave reviews. 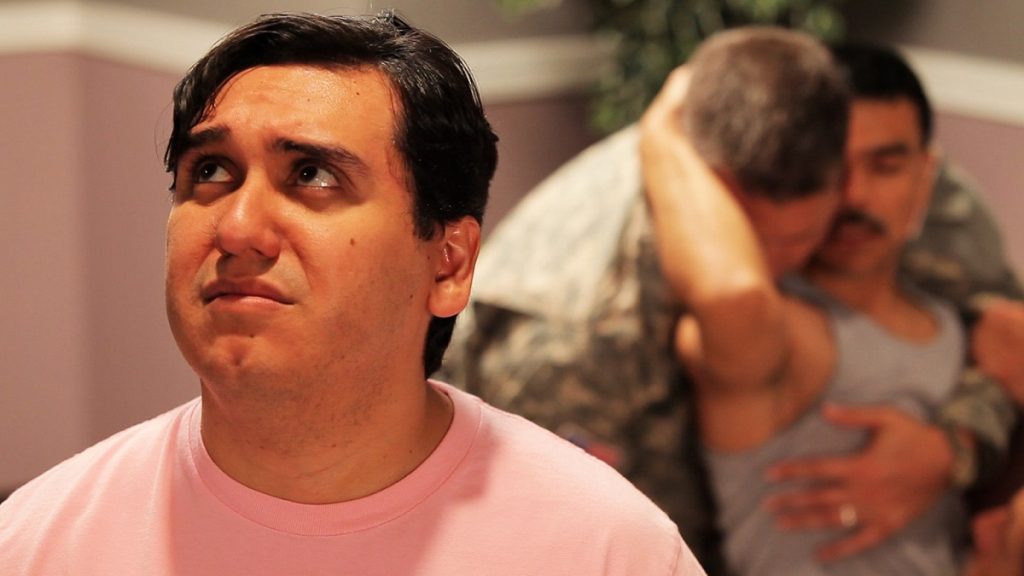 An eye-opening gem of a short film collection, Fourplay offers up four short stories both hilarious and emotionally powerful. Each of the individual films follow seemingly ordinary characters who find themselves thrust into some very unusual sexual situations. In Skokie, a closeted woman’s crush on her minister’s wife erupts during a weekend of dog-sitting. In Austin, a young couple discovers a kinky way to keep their relationship alive. In Tampa, a man with an extremely small penis finds his nirvana in a public restroom. And in San Francisco, a cross-dressing sex-worker faces a challenging assignment with a elderly quadriplegic man. Fourplay handles a wide variety of extremely taboo subjects with great sensitivity and depicts sex acts as potentially cathartic moments in our lives. It’s also riotously funny and deeply heartfelt.