TLAgay Days: Get Anywhere from 30% to 50% OFF with Exclusive Sales This Weekend!

The biggest gay home entertainment sales event of the year is upon us! This weekend only, we’re offering a variety of massive deals to satisfy all of your needs! You can get up to 50% OFF select adult titles, 40% OFF select gay movies and 30% OFF our incredible VOD selections across the board. The deals don’t stop there either. 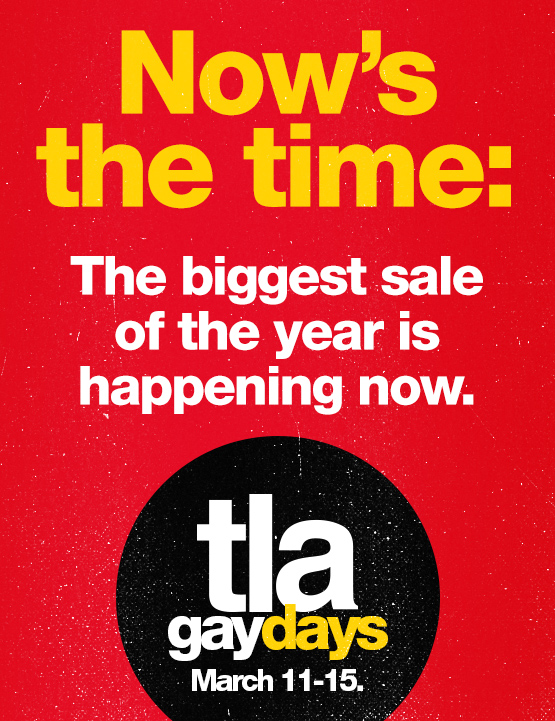 Take advantage of this limited-time promo code and get an extra 20% OFF your order!

To Our Loyal Customers:

We wanted to extend a heartfelt THANK YOU for helping us weather the difficult storm of the past several months. We are happy to report that our warehouse is once again fully operational (with extra safety and distancing measures in place) and that shipping delays and restrictions are no longer a factor on our end.

As a way of showing our appreciation, please feel free to use the code below to take an extra 20% OFF IN-STOCK DVDS, BLU-RAYS AND TOYS.

Please continue to stay safe. Stop by and visit us anytime at TLAgay.com for a massive selection of gay entertainment (both in-stock and on-demand).

USE PROMO CODE THANKYOU AT CHECKOUT 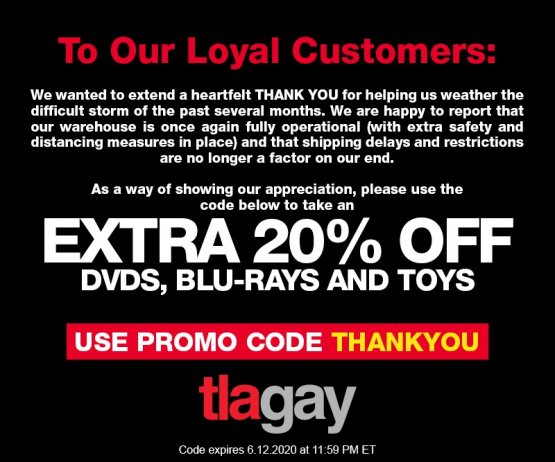 10 Gay Movies to Snag While They’re On Sale!

From now until Friday, our customers can get an extra 25% OFF a whole bunch of select gay movies! Click here to visit us at TLAgay.com and see the full selection. There are over 100 movies to choose from. We know that’s a lot, so we’re highlighting ten recent favorites below that you can snag while they’re on sale!

Boys
Following one man through two timelines, Boys, the newest feature from director Christophe Charrier, is a gripping and compassionate study of first love and the lingering sting of loss. We first meet Jonas (Felix Maritaud) in the present, where he’s having a rough go of it. He’s prone to starting fights at the local gay bar, and his boyfriend has had enough of his infidelity and alcohol-soaked antics. His volatile behavior may stem from a traumatic incident in his past. The film flashes back to 1997, where Jonas (played as a high school kid by Nicolas Bauwens) meets Nathan (Tommy Lee Baik), the rebellious new student who will become his crush. The boys venture into the night on their first date unaware that it’s about to change their lives forever. Don’t miss this searing mystery.

BPM (Beats Per Minute)
In Paris in the early 1990s, a group of activists goes to battle for those stricken with HIV/AIDS, taking on sluggish government agencies and major pharmaceutical companies in bold, invasive actions. The organization is ACT UP, and its members, many of them gay and HIV-postive, embrace their mission with a literal life-or-death urgency. Amid rallies, protests, fierce debates and ecstatic dance parties, the newcomer Nathan (Arnaud Valois) falls in love with Sean (Nahuel Pérez Biscayart), the group’s radical firebrand, and their passion sparks against the shadow of mortality as the activists fight for a breakthrough. Winner of the coveted Queer Palm award the Cannes Film Festival, BPM (Beats Per Minute) is one of the most acclaimed gay films of the last several year. It also earned spots on countless critical “Top Ten” lists when it came out.