The Gay Cinema Video On Demand experience at TLAgay.com has your entertainment needs covered! We’re always working to expand selection of new and old gay-themed movies available for your viewing pleasure. As it’s FRIDAY THE 13TH (muahaha!), we’re spotlighting THIRTEEN of our favorite gay-themed horror and thriller flicks – ALL available to watch INSTANTLY! These aren’t our all time favorites necessarily, but just a handful of flicks we want to highlight that you can watch RIGHT NOW. 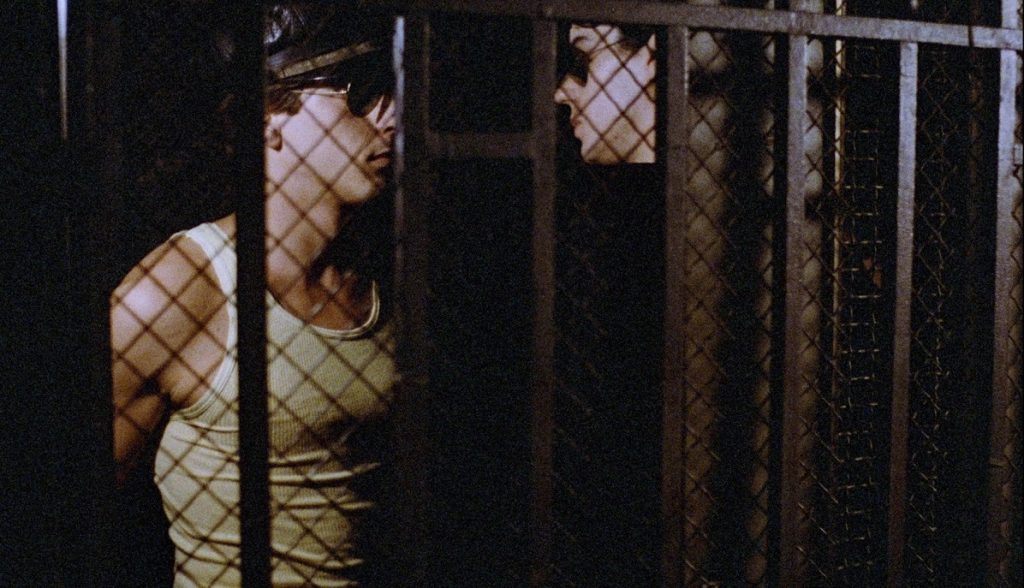 Arrebato (Rapture)
Arrebato (Rapture) is a dimension-shattering blend of heroin, sex and Super-8 film. Made in 1979, this towering feat of counterculture was the final feature of cult filmmaker and movie poster designer Ivan Zulueta. It is a film that defies genre and just so happens to be Pedro Almodovar’s favorite horror flick. Horror movie director Jose (Eusebio Poncela) is adrift in a sea of doubt and drugs. As his belated second feature nears completion, his reclusive bubble is popped by two events: the sudden reappearance from an ex-girlfriend and a mysterious package from past acquaintance Pedro (Will More) – containing a reel of Super-8 film, an audiotape and a door key. From there, the boundaries of time, space and sexuality are erased as Jose is once more sucked into Pedro’s sinister orbit. Together, they attempt the ultimate hallucinogenic catharsis through a moebius strip of filming and being filmed. 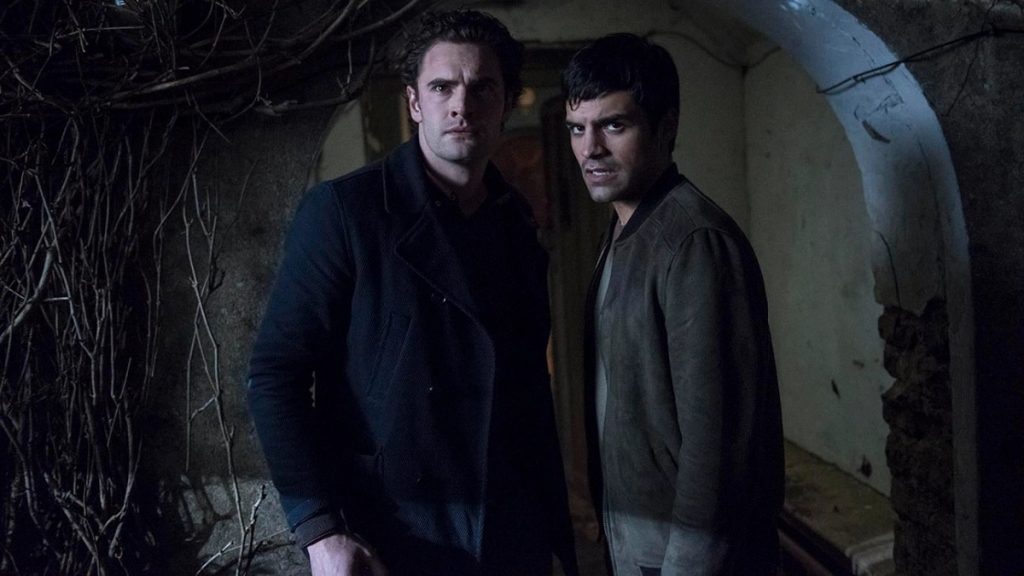 B&B
B&B earned praise from LGBT horror/thriller/suspense fans at festivals and now it’s available to watch at TLAgay! Lovers Marc and Fred (Tom Bateman and Sean Teale) initiated a major legal battle after they were refused a double bed at a remote Christian guest house. They came out of their court case victorious and now they’re back at the establishment to claim their conjugal rights. Triumph, however, quickly turns to terror when a scary Russian neo-Nazi also checks in. Their weekend of celebratory fun soon becomes a bloody battle for survival. B&B is a whip-smart and brutally funny dark comedy-thriller that has earned rave reviews from critics – some of whom have even compared it to the work of Alfred Hitchcock. The Hollywood Outsiders, specifically, called it “a film Alfred Hitchcock would be proud of.” The Horror Society said it’s “frickin’ fantastic and a trailblazer for LGBT cinema.” 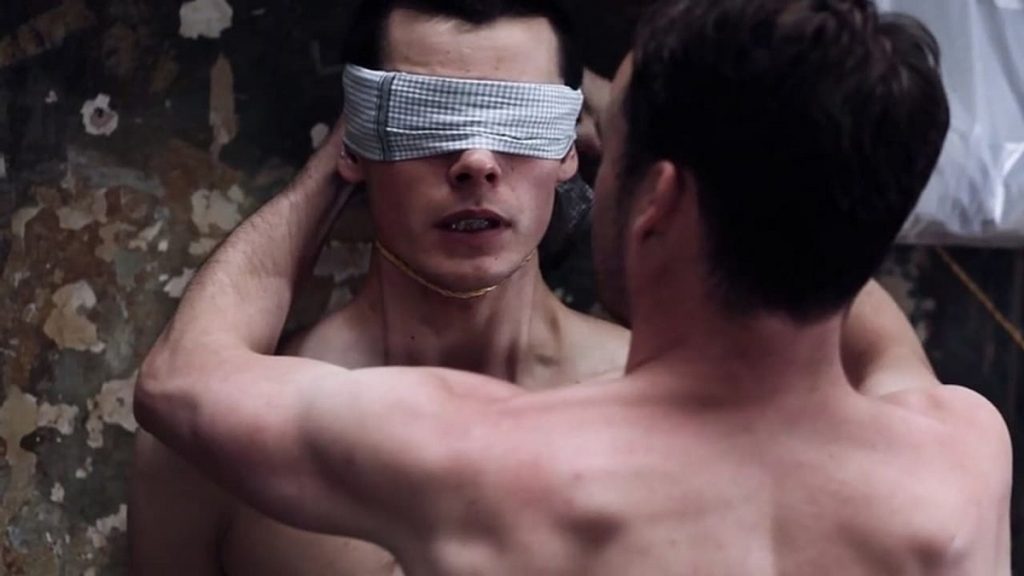 Black Briefs
Curated by prolific writer/director Rob Williams, Black Briefs features six award-winning short films with pretty dark, horror or horror-adjacent stories and themes. When it comes to short film compilations, there is always something to recommend. If you don’t like the first one, chances are good there is a short just around the corner that you’re going to appreciate more. In Black Briefs, we really like Hong Khaou‘s steamy Spring, about a young man who meets up with a stranger for a little exploratory sadomasochistic sex. Our favorite, though, is Greg Ivan Smith‘s Remission. A man, all alone in a secluded cabin, awaiting the results of a serious medical test, is haunted by a terrifying presence. It’s genuinely chilling and it’s one of those rare movies that can create dread and unease even in its scenes set during the daytime. 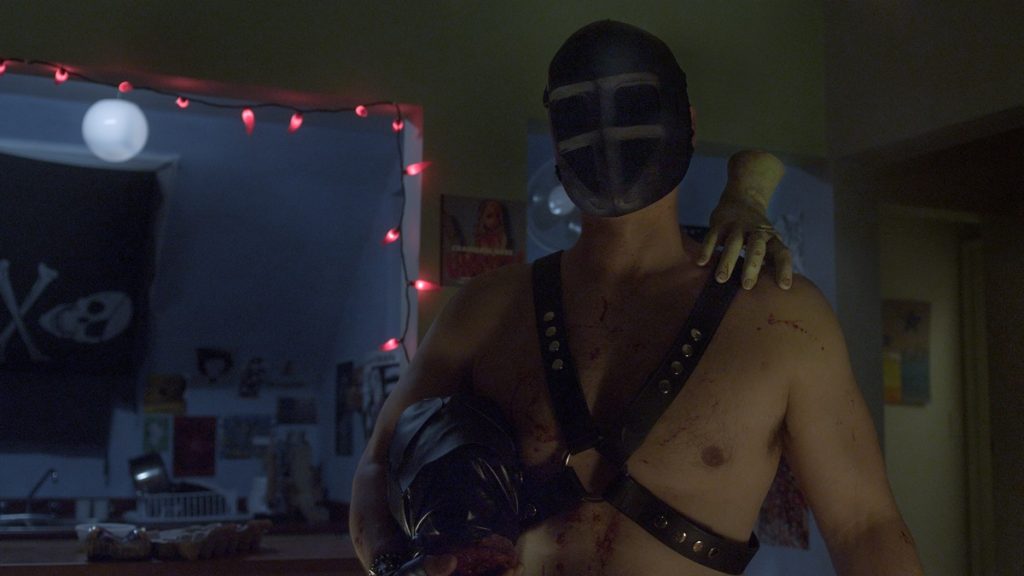 Bloody Knuckles
Canada, our neighbor to the north, is not known for cinematic carnage or gore comedies, but first time director Matt O. shakes things up with Bloody Knuckles, a deliriously offensive, gory and happily un-PC horror-comedy. Travis (Adam Boys), an underground comic book artist with a penchant for obscene caricatures, upsets a thin-skinned crime lord, who responds by cutting off the young man’s hand. A despondent and now alcoholic Travis wallows in post-severed hand depression. Will criminality reign supreme? Will Travis give up his acerbic pen and live alone as a bitter one-handed man? Not if the slightly rotted hand, now alive and determined to exact revenge, teems up with his former body and a masked, S&M-loving gay superhero to rid the city of evil! 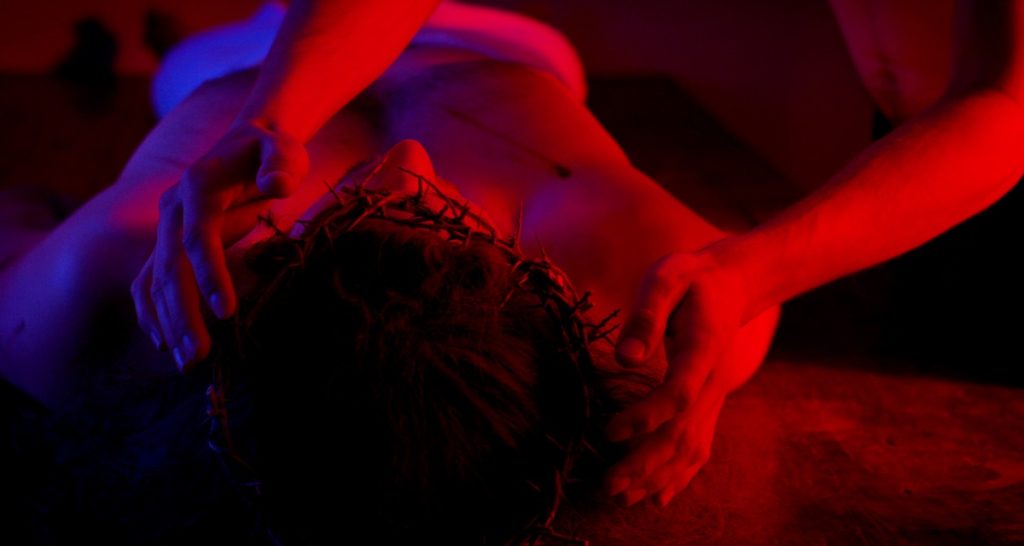 A Closer Walk with Thee
Jordan (AJ Knight), a young Christian missionary, gets caught watching his handsome pastor Eli (Gregory Shelby) in the shower. The rest of his church ostracizes him until Eli (who happens to be a fledgling exorcist) suggests it may be demonic possession that’s giving Jordan his ungodly homosexual urges. What starts as an exorcism to save their friendship quickly descends into psycho-sexual madness. An award-winner at film festivals, A Closer with Thee has earned some rave reviews from horror-savvy critics, Cineounx said it’s “like what would happen if someone handed Todd Solondz as exorcism script and said, ‘knock yourself out'” and Parade said it “Mixes exorcism, homoeroticism and evangelistic angst in a combo that clearly doesn’t cater to the Sunday School crowd.” Plus, the “hot young pastor and obedient church boy” dynamic is undeniable dirty fantasy fuel. 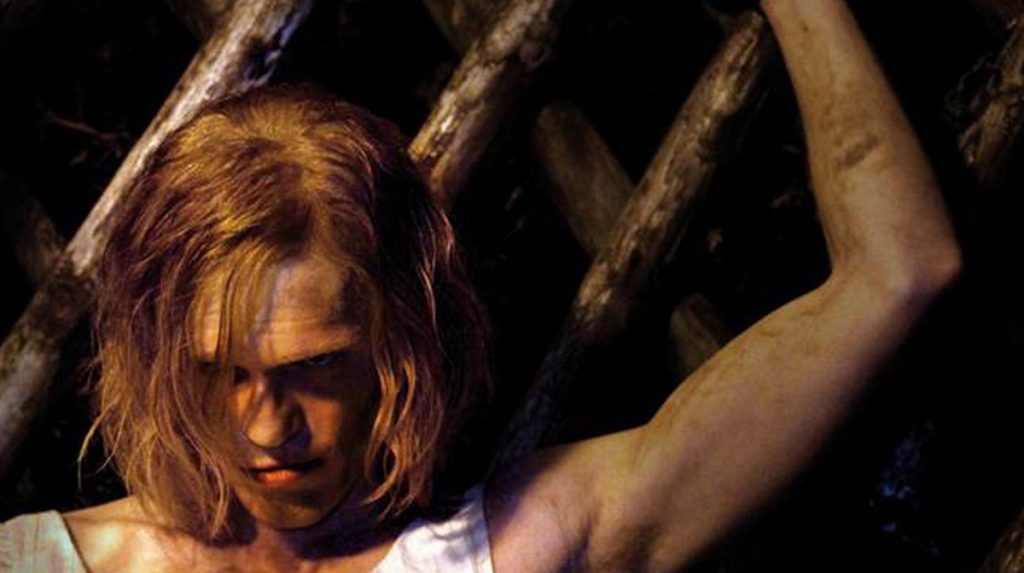 Der Samurai
Jakob (Michel Diercks) is a policeman in a village deep in the woods, where little happens… until the arrival of a mysterious wolf that is causing havoc. Working the night shift, Jakob is tracking the wolf, only to discover that the lupine lurker is actually a man clad only in lipstick and a ladies’ slip – and toting a samurai sword that he uses to lop off the heads of the townspeople, including Jakob’s tormentors. Jakob and the transvestite samurai seem to share a bond, and as the night gets darker, events get even weirder. Unlike any other horror film you’re likely to see, Der Samurai is a German mind-bender about shape-shifting cross-dressers, bloody decapitations, repressed sexual desires and small town life. It’s a surreal mix of dark comedy and eerie creep-out fun that recalls David Lynch and pays homage to, while often improving upon, the synth-soundtrack-packed horror classics of the 1980s. 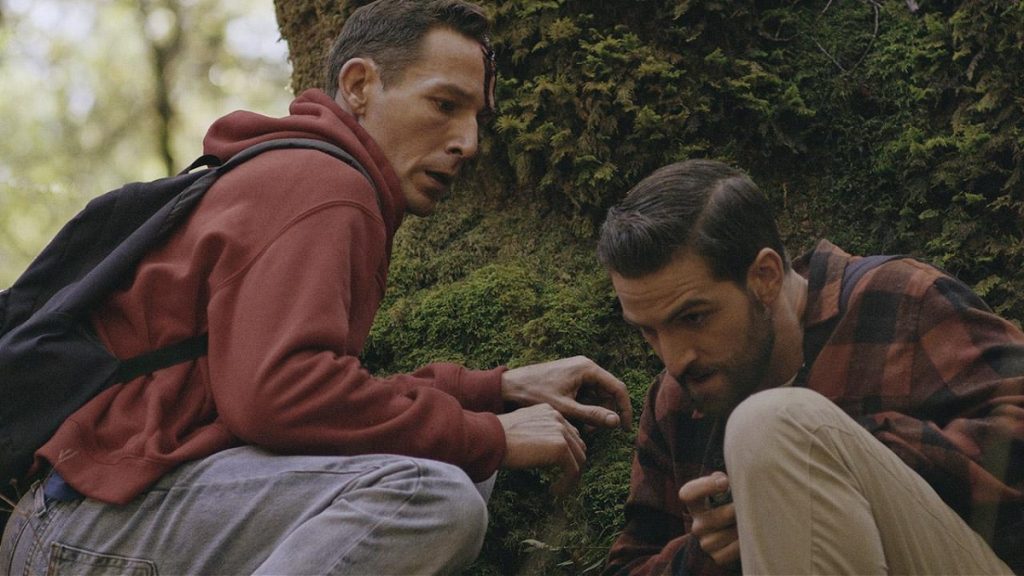 Devil’s Path
In the early 1990s, two strangers (Stephen Twardokus and JD Scalzo) meet in a wilderness park where gay men cruise for sex. What seems like an innocent and random meeting quickly descends into a horrific nightmare. With recent disappearances and attacks, the two men soon find themselves in the terrifying position of being the next victims in a deadly game of cat and mouse. As they flee further into the woods to escape the danger, they begin to understand that the greatest danger of all may be closer than either of them realize. Will these two strangers be able to work together to defeat the darkness that has settled in on Devil’s Path? Or will their own secrets and lies lead them to be the next two missing persons in this perilous park? This riveting new gay thriller will keep you on the edge of your seat. 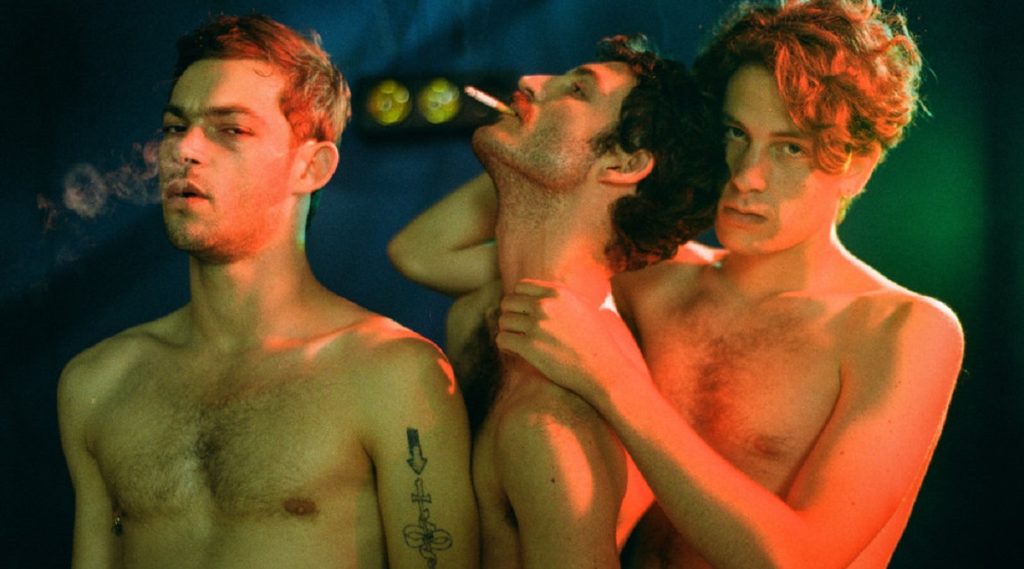 Knife+Heart
Easily one of the most acclaimed gay cult films in recent memory, this sexually explicit throwback thriller from visionary writer-director Yann Gonzalez is an absolute must-see! Vanessa Paradis is incredible as Anne, a savvy French woman who produces third-rate gay porn. After her editor and lover Lois (Kate Moran) leaves her, she tries to win her back by shooting her most ambitious film yet – with the help of her trusted, flaming sidekick Archibald (Nicolas Maury). But when one of her actors is brutally murdered, Anne gets caught up in a strange investigation that turns her life upside-down. Shot on 35mm and featuring a killer retro score from the band M83, Knife+Heart is an ultra-stylish and blood-soaked ode to 1970s-era Brian De Palma, Dario Argento and William Friedkin. 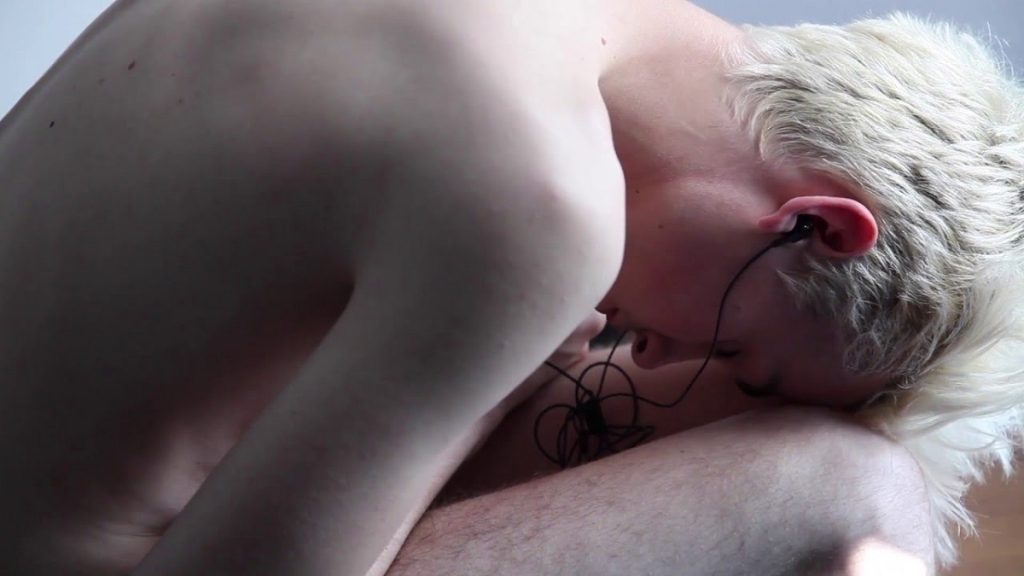 Like Cattle Towards Glow
Dennis Cooper and Zac Farley‘s Like Cattle Towards Glow is a 93-minute film consisting of five independent, thematically and emotionally interconnected scenes. The film is a complex, intimate, strangely serene, wide-ranging, and always challenging exploration of sexual desire as a hiding place. In these unique, stylistically and temperamentally diverse scenes, each one featuring its own set of characters and storyline, sex makes a promise of something so intense and untenable to the characters that they feel they must enter it in secret – through an act of violence, or under the guise of an unrelated transaction, or by rationalizing its dangers away with the help of politics, or through utilizing it remotely as material for a purely aesthetic project. Like these characters, and like sex itself, Like Cattle Towards Glow is as deep, knowing, and unknowable as it is raucous, original, and explicit on the surface. 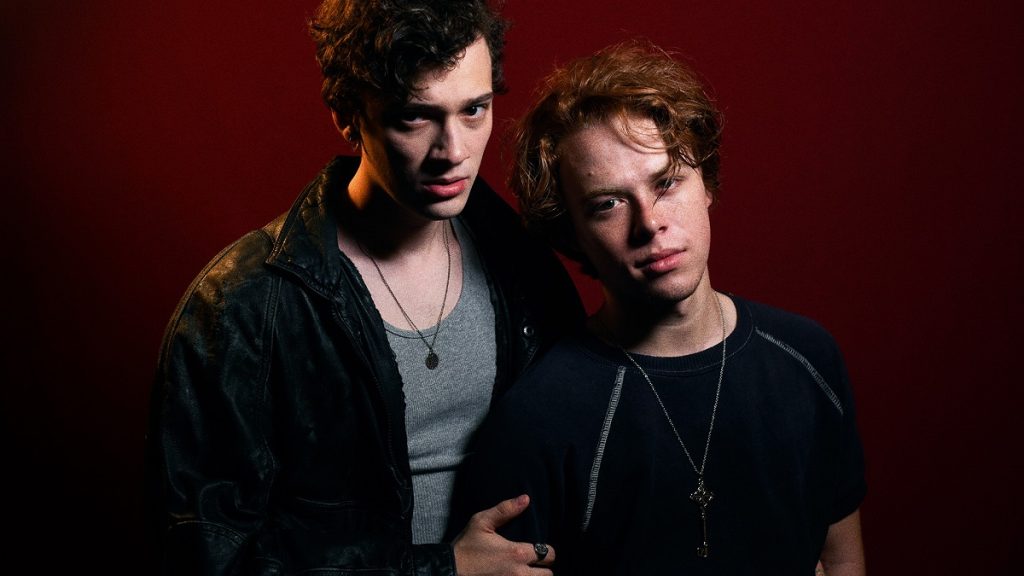 Rapture in Blue
Like a David Lynch thriller filmed through a queer lens, writer-director Ryder Houston‘s Rapture in Blue follows a young man’s quest through flickering neon and hazy noir shadows to find his true self. After Jason (Bryce Lederer) tries to use his childhood home for a steamy rendezvous with his girlfriend Valerie (Sarah Greenfield), they discover it has been newly occupied by the smoldering Sebastian (Tanner Garmon), who eagerly warms up to anxious Jason. Wracked with desires he’s long tried to ignore while also being pressured by his girlfriend’s sensual advances, a growing sense of unease and dread permeates his life. After receiving an “impossible” photo of him embracing Sebastian, Jason realizes he needs to confront the madness consuming him from all sides. 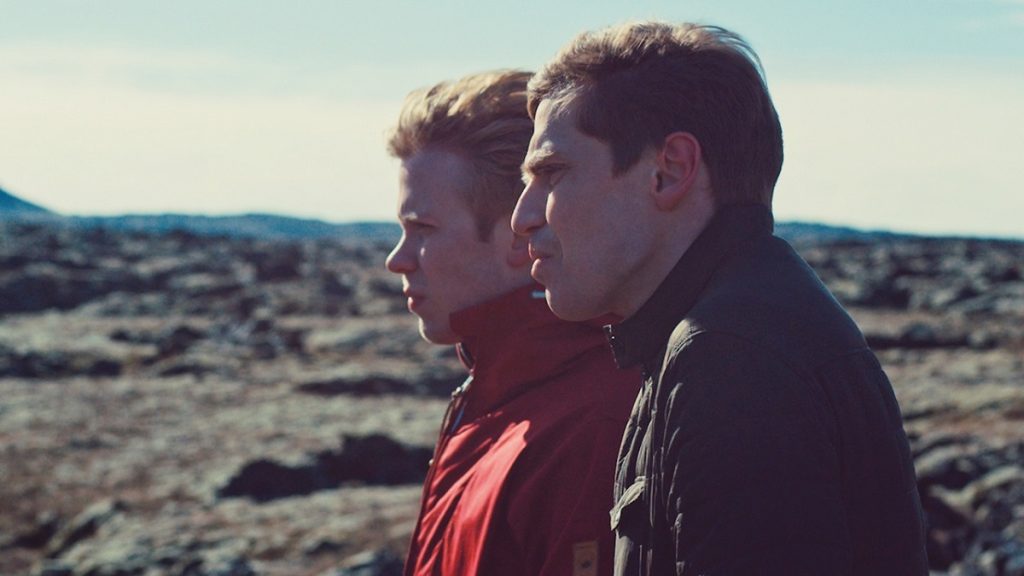 Rift
Paying homage to classic art-house horror films like Robert Wise’s The Haunting and Nicolas Roeg’s Don’t Look Now, Rift is an enticing, well-acted and expertly-directed mystery-thriller from Iceland that will make the hairs on the back of your neck stand up. Gunnar receives a strange phone call from his ex-boyfriend, Einar, months after they parted ways. Einar sounds distraught, like he’s about to do something terrible to himself, so Gunnar drives to the secluded cabin where Einar is holed up and soon discovers there is more going on than he imagined. As the two come to terms with their broken relationship, some other person seems to be lurking outside the cabin, wanting to get inside. Eerie and stylishly crafted, Rift proved itself a big hit at film fests – not just LGBT festivals, but general horror film festivals as well, where it has earned rave reviews. 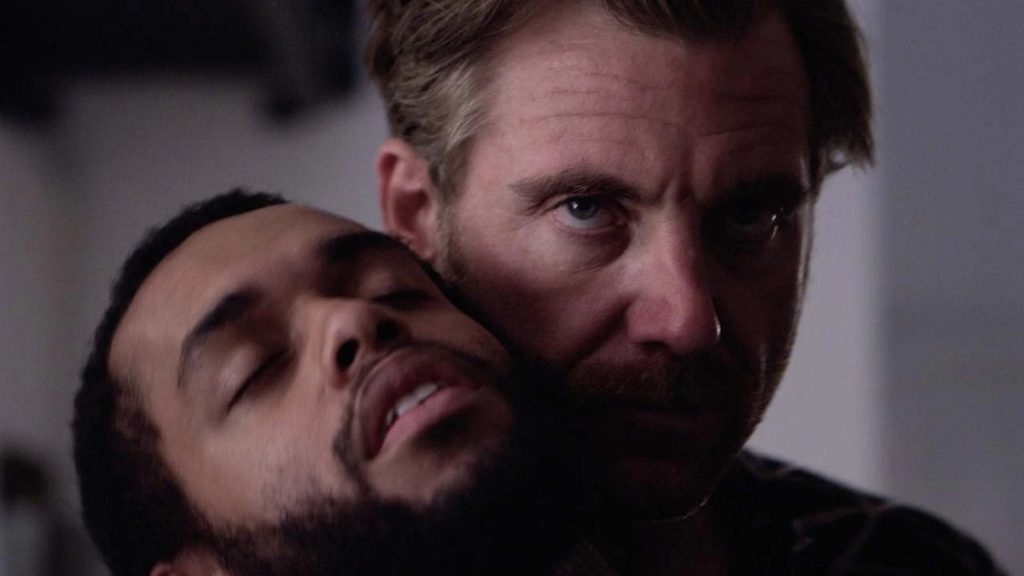 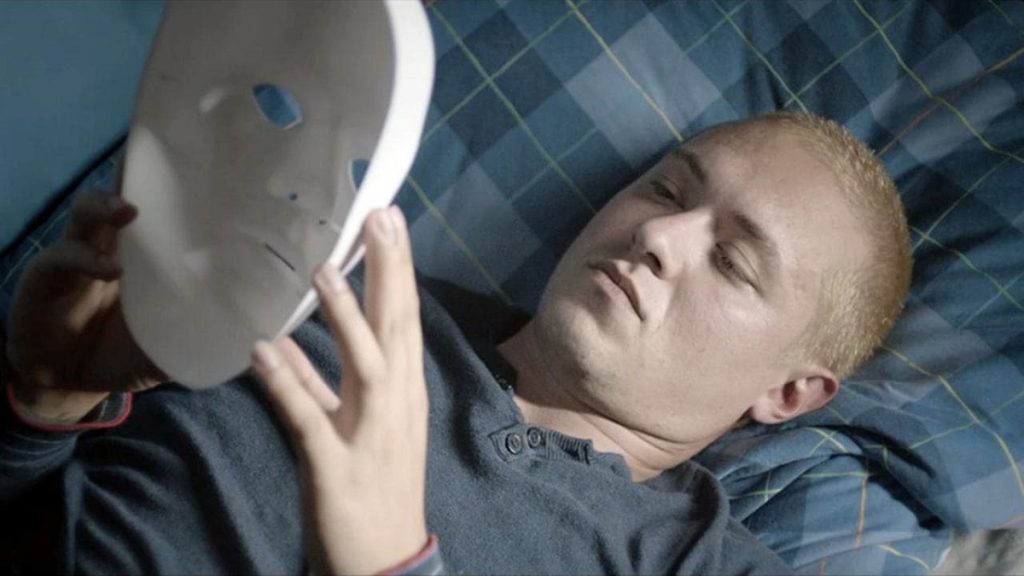 The Year I Lost My Mind
From prolific German director Tor Iben (Love Kills, The Passenger, The Visitor) comes a brand-new thriller about a lonely young man who becomes dangerously obsessed with a perfect stranger. After encountering him during a burglary, Tom (Alexander Tsypilev), a disturbed young man prone to wearing creepy masks that obscure his quite handsome features, begins stalking and antagonizing the attractive young Lars (Julien Lickert). When Lars finally discovers that Tom is on his tail, and that his intentions may be somewhat sinister, he manages to turn the tables on him, leading to a unexpected game of cat-and-mouse and a shocking confrontation. Sexy and unsettling in equal measure, the tension is palpable in this stylish drama with shades of Alfred Hitchcock. 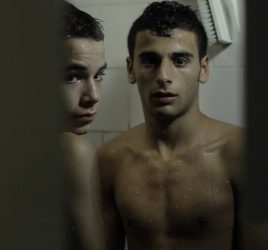