The Films of Marlon Riggs

There has never been a filmmaker quite like Marlon Riggs (1957–1994): an unapologetic gay black man who defied a culture of silence and shame to speak his truth with resounding joy and conviction. An early adopter of video technology who had a profound understanding of the power of words and images to effect change, Riggs employed a bold mix of documentary, performance, poetry, music, and experimental techniques in order to confront issues that most of Reagan-era America refused to acknowledge, from the devastating legacy of racist stereotypes to the impact of the AIDS crisis on his own queer African American community to the very definition of what it is to be Black.

You can find more info about each of the films below – along with the awesome new Criterion Collection artwork – and click here to pre-order your copy. The Signifyin’ Works of Marlon Riggs will be available on DVD and Blu-ray beginning June 22nd. 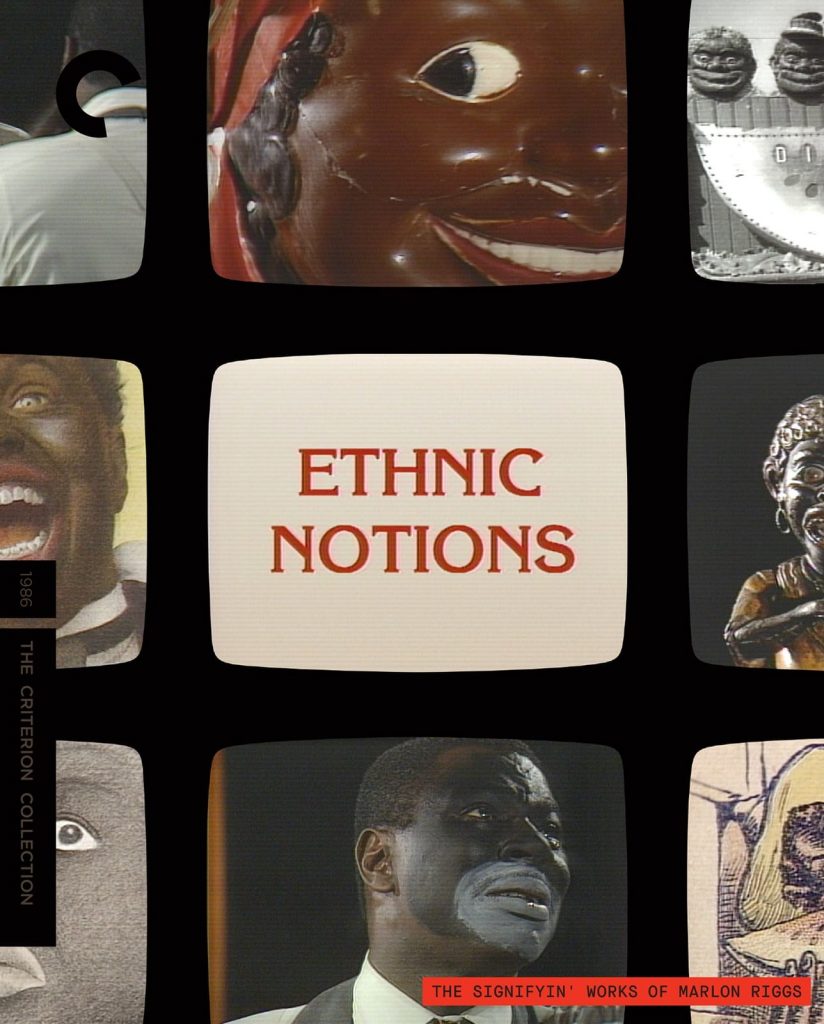 Ethnic Notions
Riggs brings viewers face-to-face with the insidious images that have shaped America’s racial mythologies, in his first major work, a brilliant and disturbing deconstruction of the ways in which anti-Black stereotypes have permeated nearly every aspect of popular culture. Through razor-sharp historical analysis including interviews with historians and folklore scholars, powerfully deployed imagery, and narration by actor Esther Rolle, Ethnic Notions illuminates, with devastating clarity, how dehumanizing caricatures of Black people—seen everywhere from children’s books to films to household products—have been used to uphold white supremacy and to justify slavery, segregation, and the continuing oppression of African Americans. In its refusal to look away from racism’s ugliest manifestations, this Emmy-winning documentary has become an essential text for understanding the origins of American racial violence. 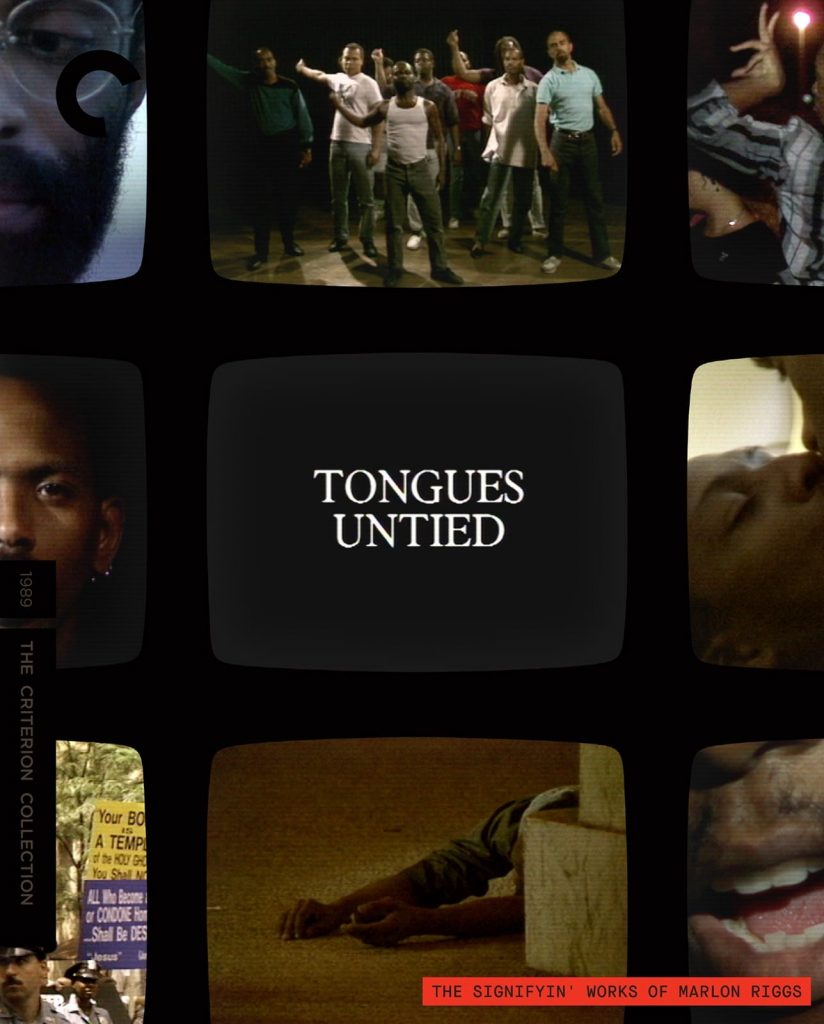 Tongues Untied
Made, in Riggs’s own words, to “shatter the nation’s brutalizing silence on matters of sexual and racial difference,” this radical blend of documentary and performance defies the stigmas surrounding Black gay sexuality in the belief that, as long as shame prevails, liberation will never be possible. Through music and dance, words and poetry by such pathbreaking writers as Essex Hemphill and Joseph Beam—and by turns candid, humorous, and heartbreaking interviews with queer African American men—Tongues Untied gives voice to what it means to live as an outsider in both a Black community rife with homophobia and a largely white gay subculture poisoned by racism. A lightning rod in the conservative culture wars of the 1980s that incited a right-wing furor over public funding for the arts, the film has lost none of its resonance in its unapologetic, life-affirming declaration that “Black men loving Black men is the revolutionary act.” 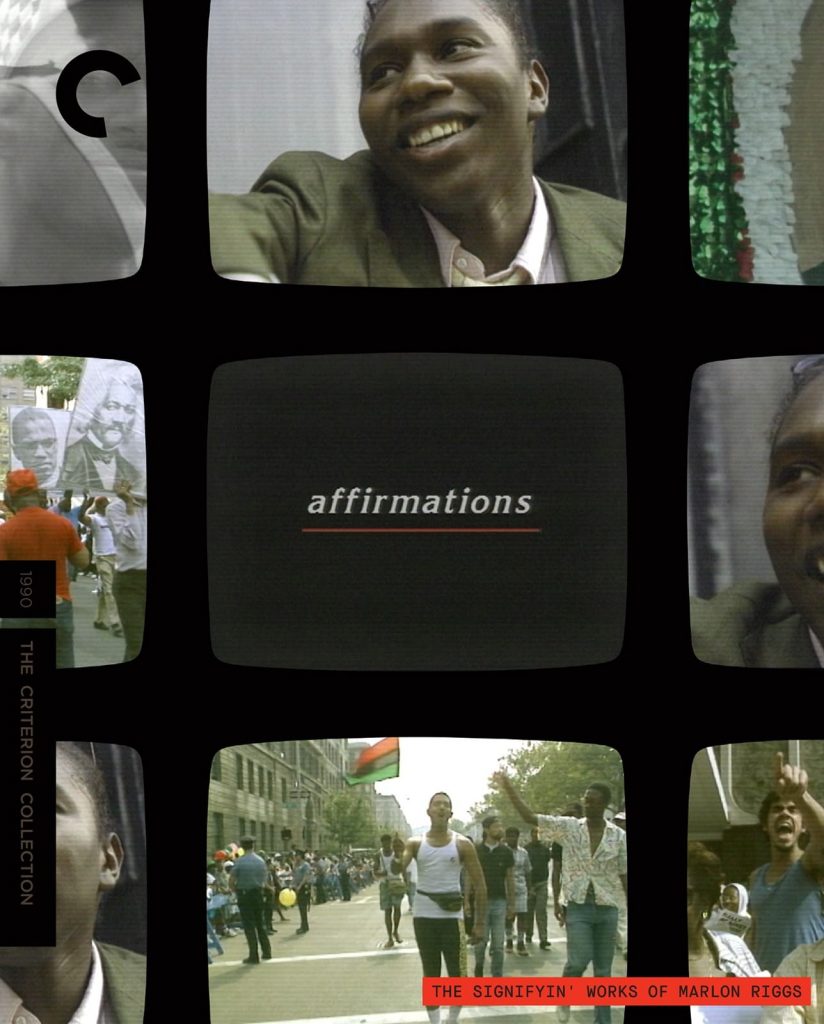 Affirmations
Riggs expresses the hopes, dreams, and desires of gay Black men in this ode to queer African American empowerment. Built around outtakes of interview and protest footage from Tongues Untied, Affirmations begins as a candid, sex-positive confessional about first-time penetration and evolves into a rousing chorus of calls for freedom, recognition, and inclusion. 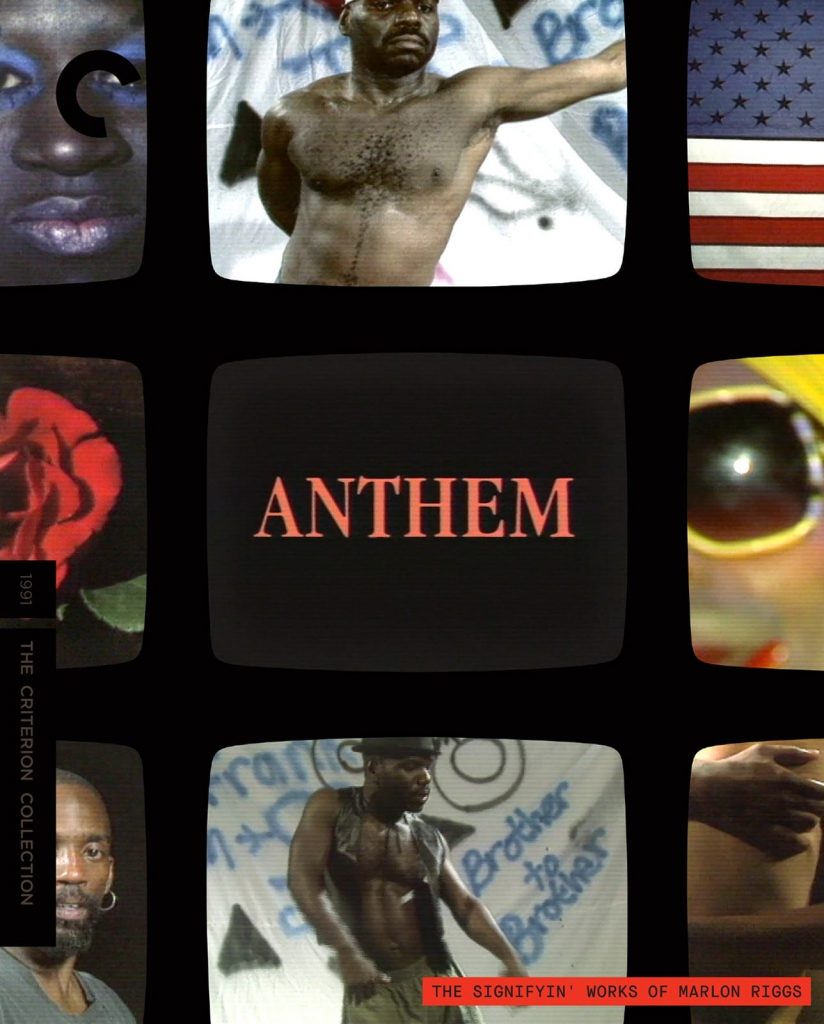 Anthem
“Pervert the language.” Made at a time when Riggs was three years into living with HIV and the motto “Silence=Death” was the queer community’s defiant response to the antigay policies of the Reagan era, this experimental music video employs a mix of poetry, African beats, and provocative imagery—sexual, political, and religious—in order to challenge and redefine prevailing images of Black masculinity. Led by the liberated dancing of the filmmaker himself, Anthem is a bold vision of queer revolution, proclaiming “Every time we kiss we confirm the new world coming.” 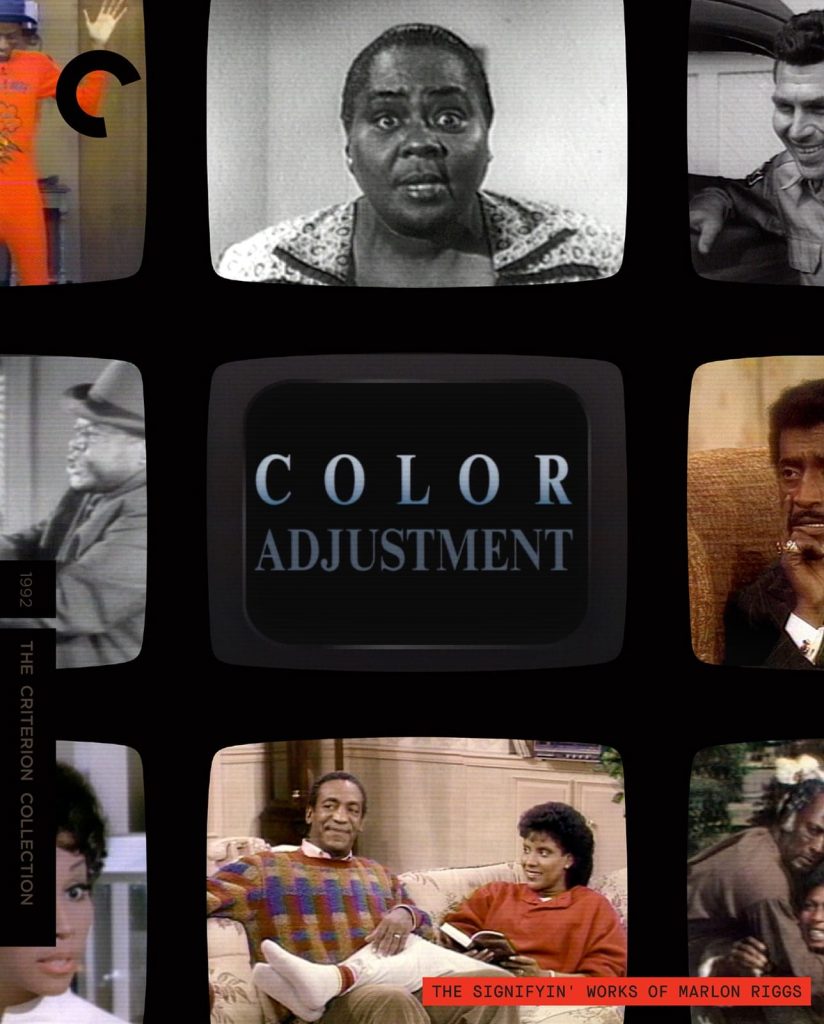 Color Adjustment
What does the American dream look like? Where do Black Americans fit into it? And what is television’s role in shaping our views of racial progress and the idealized American family? Picking up where the groundbreaking Ethnic Notions left off, this pioneering work of media studies by Riggs presents a complicated, challenging, and nuanced view of evolving racial attitudes as reflected in popular programs such as Amos ’n’ Andy, Julia, All in the Family, Good Times, Roots, and The Cosby Show. Narrated by Ruby Dee and featuring interviews with actors Diahann Carroll, Tim Reid, and Esther Rolle, African American historian Henry Louis Gates Jr., and producer Norman Lear, among others, Color Adjustment looks beyond the whitewashed, middle-class mythologies peddled by prime-time entertainment to track the ways in which Black Americans have been assimilated into a new but no less harmful racial narrative. 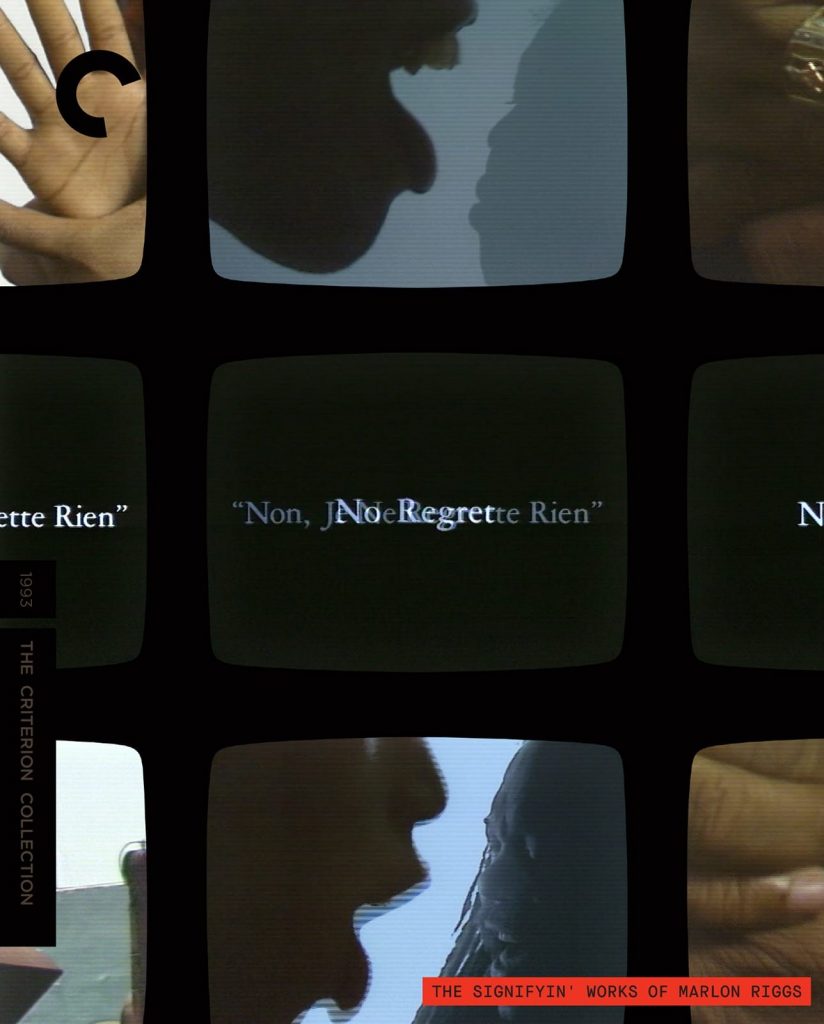 Non, Je Ne Regrette Rien (No Regret)
Through music, poetry, and courageous self-disclosure, five HIV-positive gay Black men (among them poet and performance artist Assotto Saint) discuss their individual confrontations with AIDS, illuminating their journeys through the fear, shame, and stigma that accompanied the disease at the height of the epidemic toward healing, acceptance, and truth. In Non, Je Ne Regrette Rien (No Regret), Riggs tells stories of self-transformation in which a once unmentionable “affliction” is forged into a tool of personal and communal empowerment. 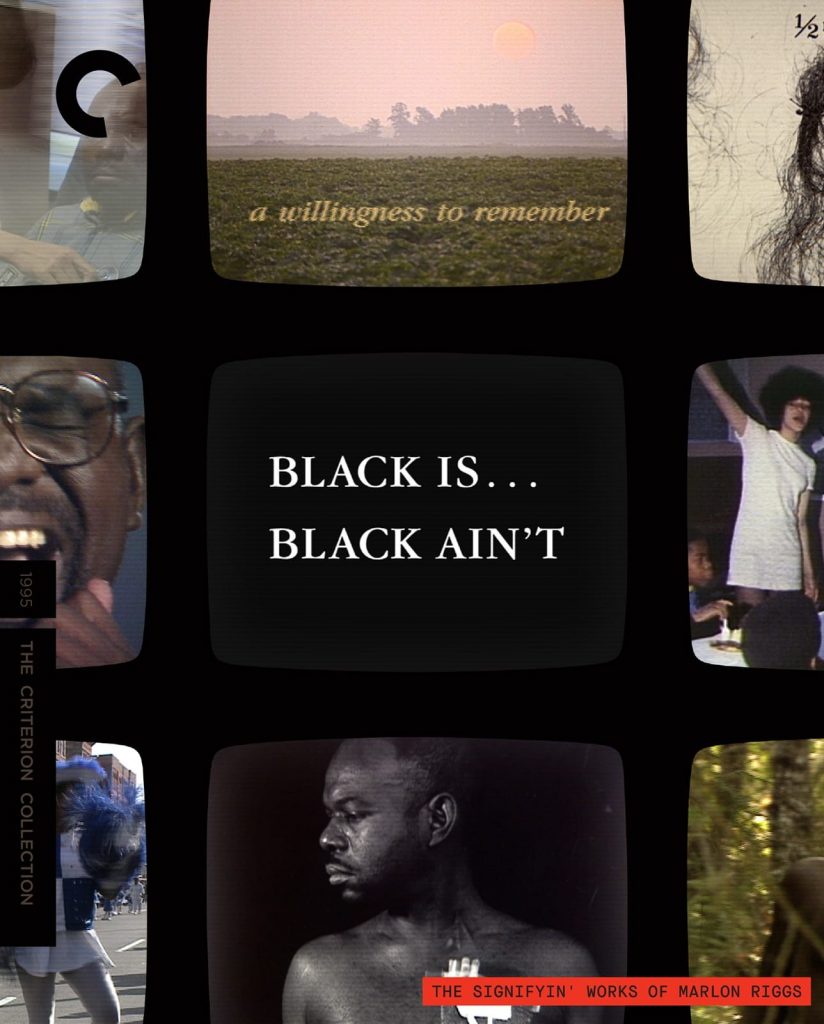 Black Is… Black Ain’t
Made with an urgency imparted by the knowledge that he was nearing the end of his life, Riggs’s final film—completed after his death of AIDS by a group of his devoted collaborators—is a wide-ranging consideration of a question that had long been central to his work: What does it mean to be Black? Using his mother’s gumbo recipe as a metaphor for the diversity of the African American experience, Riggs travels the country, seeking insights from leading thinkers like Angela Davis, Henry Louis Gates Jr., bell hooks, and Barbara Smith as well as ordinary people—young and old, rich and poor, rural and urban, gay and straight—all grappling with the numerous, often contested definitions of Blackness that have shaped their lives. Punctuated by footage of a dying Riggs directing his crew and delivering parting wisdom from his hospital bed, Black Is . . . Black Ain’t breaks down the divides of class, colorism, patriarchy, and homophobia as it issues a stirring appeal for unity.