Postcards from London is writer/director Steve McLean‘s homage to a lost Soho, a Soho which no longer exists. Or perhaps it only ever existed in his dreams. So instead of trying to re-create a specific bygone era, the Soho of his youth in the 1970’s and early 80’s, he created a gorgeous, eye-catching Soho of the imagination, a Soho of memory.

The film tells the story of a beautiful young man named Jim (Beach Rats star Harris Dickinson) who, having traveled from the suburbs, finds himself in Soho where he falls in with The Raconteurs – a gang of unusual high class male escorts who specialize in post-coital conversation. From shy novice to highly sought-after escort (and, eventually, artist’s muse), Jim would be the toast of the town if it wasn’t for his annoying affliction. He suffers from Stendhal Syndrome, a rare condition which causes him to hallucinate and faint when he encounters real works of art. But when Jim is roped into the world of detecting art forgery, could his condition bring about his downfall?

Learn more about the film in this interview with the director and click here to pre-order your copy of Postcards from London. It’s coming to DVD in January. 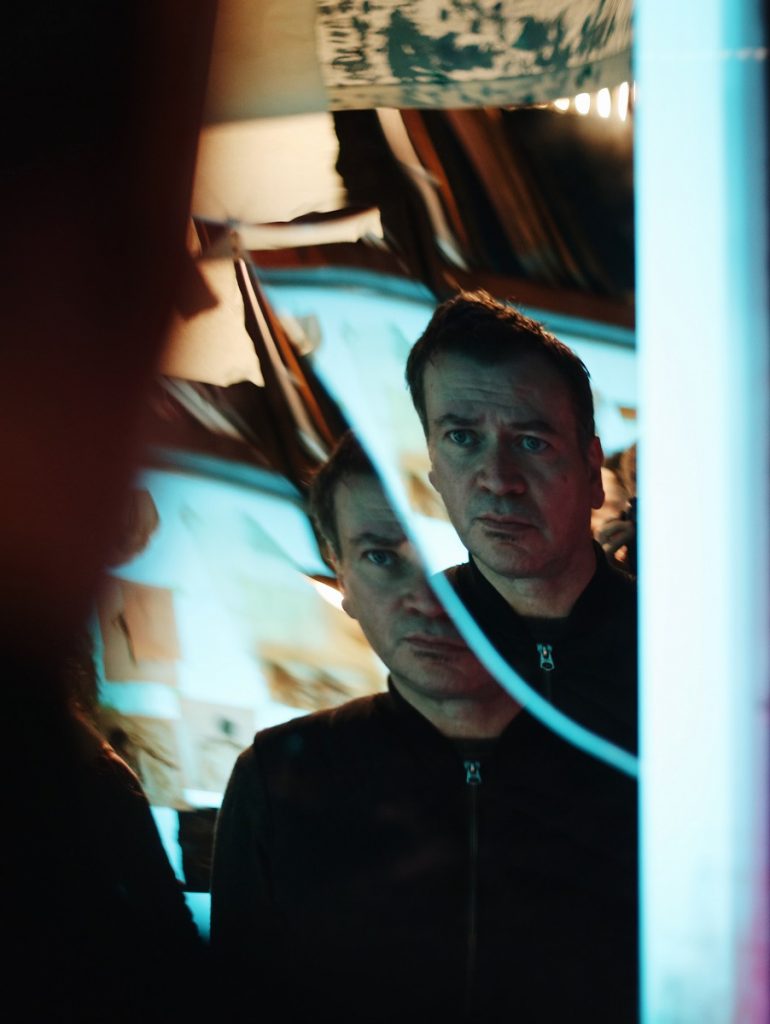 There is a part in the middle of Postcards from America which is very stylized and you could say that Postcards from London is a follow-on from that section. At the same time, I wanted to make something more optimistic. I wanted to do something about a young gay man that wasn’t about coming out or relationships but the experience of moving to a big city. I made Postcards from America at the height of the AIDS crisis in America when I was living in America, and it reflects that time. This is more optimistic in tone.

You don’t seem to have made another film in the intervening years. What have you been up to?

I got out of the business, moved back to London from New York. I wrote a couple of scripts that never got made. It was the mid to late nineties, and the heyday of British gangster movies, and those were the films that were getting made. After three years of development and nothing happening I just thought: maybe it’s not going to happen. I always had friends who worked in hospitality and I went to run a couple of restaurants and I really enjoyed it, and did that for 15 years. Then I found myself tracked down by the BFI who were wondering where I was!

I think running a restaurant is good training and has that same craziness. It’s all about multitasking. 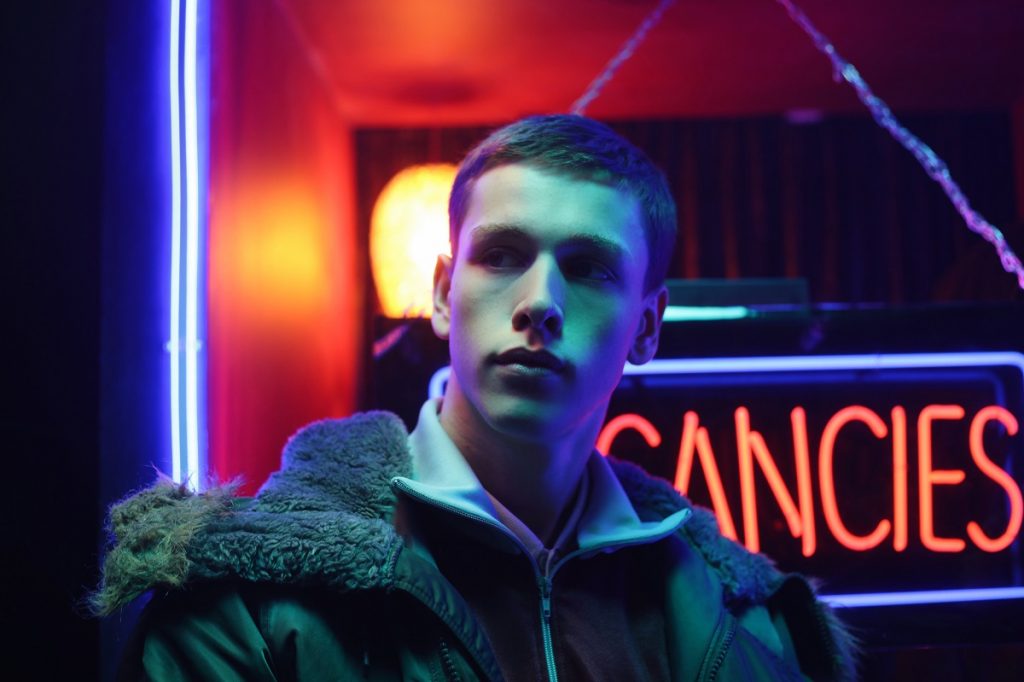 What made you want to give Soho a starring role?

I remember being blown away by it. There are parts of London that still resonate for me. I was born in Twickenham and remember the first time I came into town and going to Asylum as it was called then – and meeting Derek Jarman and Isaac Julian and Jimmy Somerville within a few months. It was the miner’s strike, pits and perverts. It was about discovering there are people on your wavelength. There were different scenes. But when I was in my 20’s there were four or five dive bars in Soho where you would go down to a basement, where it was gangsters, would- be gangsters, drag queens, gay men, gay women, a bit like Love is the Devil. That’s definitely changed. Everything’s more corporate. I was talking to someone the other day about it – the Soho of Bacon and Lucien Freud and the Colony Room is gone now. Although it seems to reference that period in the 1980s, I’m trying not to be specific about the decade within the context of the movie. Some characters are wearing a 1950’s suit, so it hopefully is operating just outside a fixed point, and resonate with people older and younger than me.

The film is studio-based. Why did you make this choice?

I didn’t want it to be a British realist film. I was adamant about that when the BFI came to me. I want to set one rule here that I do something that’s very stylized. I wanted it to be very visual. Going into Soho and being bombarded by music and images and people. It’s hopefully timeless, and a dream. I was really inspired by Hollywood musicals – and you know it’s a set.

Caravaggio is a big presence in the film. Did you worry about stepping on Derek Jarman’s toes?

I didn’t know Derek that well – though he was very supportive of my first film before he died. His Caravaggio is a bit austere and I wanted to take it a step farther. I wanted to do something a bit more comic and visually complicated.

Do you keep up with the Caravaggio industry and all the latest theories about him?

Not really. Our Caravaggio is this very moody, slightly depressed man. It’s more about what he represents.

The story is party about the Stendhal Syndrome in which an individual is supposed to fall into a trance or syncope when faced with great works of art. What made you light on that as a component of the narrative?

A friend of mine read the first draft – we’re talking 5 years ago- and there was no mention of that. And he then suggested Stendhal Syndrome and explained it. I thought it would be interesting to have someone who is magnetically beautiful to be himself unable to cope with a certain kind of beauty. I thought that twist would be quite interesting. 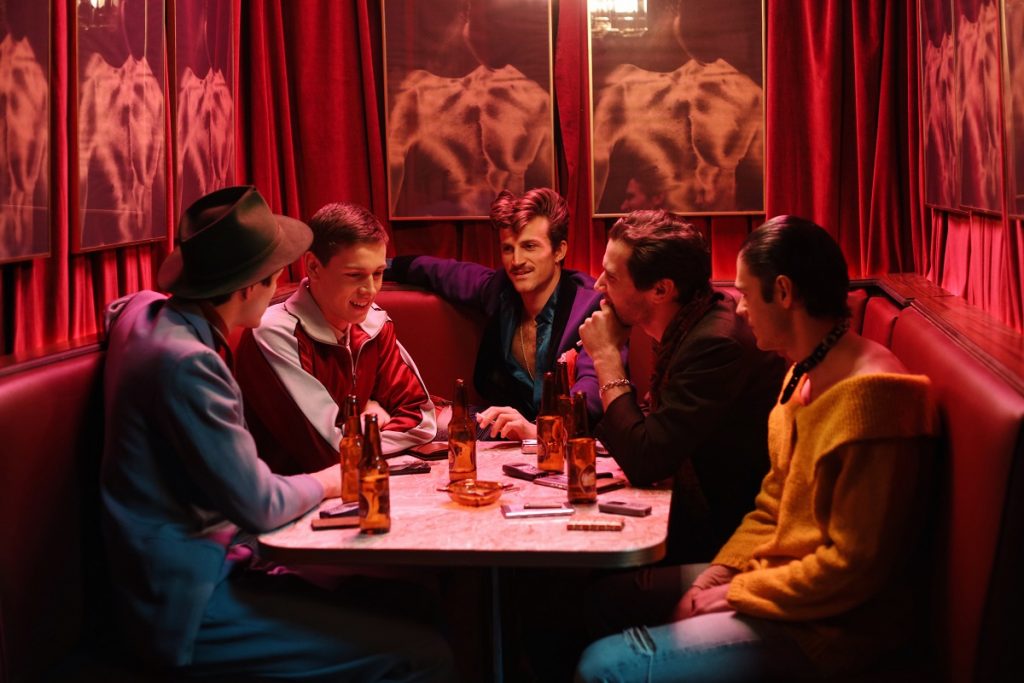 Has the script changed very much over the years? Was it always just about an ingénue coming to London and falling in with a crowd of high-end male hustlers you call The Raconteurs?

The original idea for the film was a triptych about Soho. The first part was about a fresh-faced kid who comes to town, the second part was a 20-something guy who was into the club scene and the third part was about a fifty-something survivor. Over a couple of drafts, the other strands seemed like they belonged to different films and we decided to concentrate on the young man.

Is this film in any way autobiographical? Did you hang out with hustlers in Soho?

(Laughs) Yeah. Don’t they say everything is autobiographical? I come from the suburbs really. It’s hard for people who are young now to appreciate that before Google and Facebook that there was a place you went to, to find your own kind.

I do have a slight obsession with Bacon. He was referenced more in earlier drafts but it made too much about a specific time, so I went with Caravaggio instead. I could have more fun with him.

I notice a picture of the French poet Rimbaud pinned on the set, on Jim’s bedroom wall…

I just wanted to reference him. Bowie. Velvet Underground. Iggy Pop. We see Jim tearing something from a book and he’s making a collage, which is his way of learning about these people, people who had gone before. 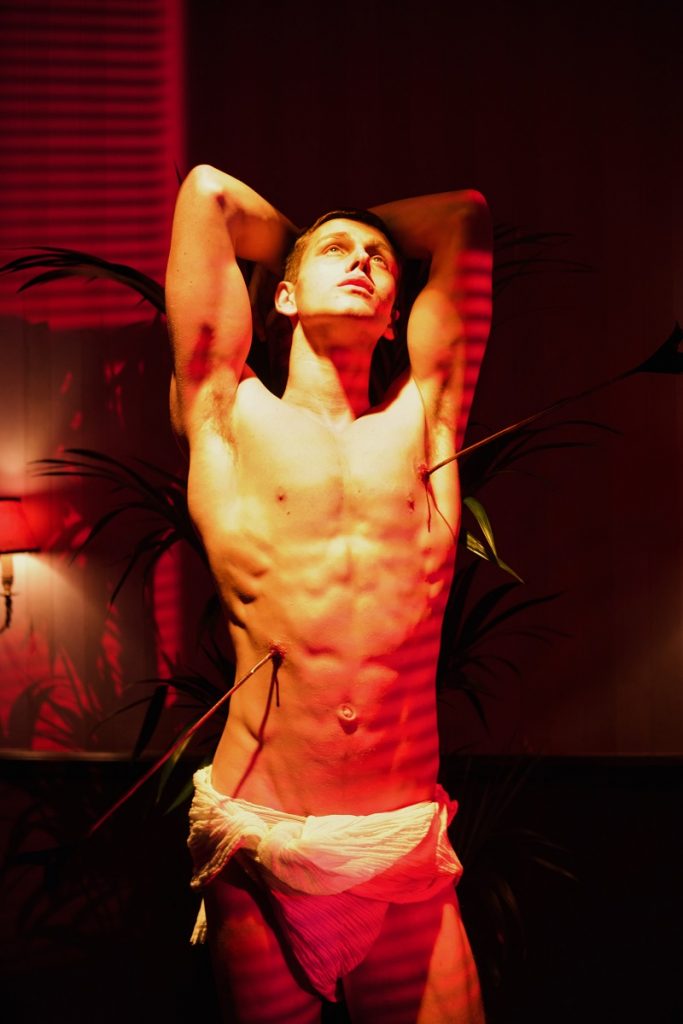 Tell me about the casting process.

We did an open casting. We saw a lot of guys for the role of Jim. People sent tapes and we had a great casting agent, Aisha Walters. I said he had to be young, a certain type of beauty, which was understated but the camera had to love him. The audience has to buy the fact that he’s attractive to Max the artist who makes him his muse, or The Raconteurs, and that he should suggest naivety as well. We saw lots of guys who were classically handsome in that leading man way but when I met Harris the second time I was looking at a monitor of him and I couldn’t take my eyes off him.

Harris just got the script immediately, and brought such enthusiasm and focus to the project. He inspired me, his delivery is so good, and he was a joy to work with.

The hustlers too must have taken some precision to cast?

I did want The Raconteurs to be foreign in the sense of really from where they were. I didn’t want that to be fake or contrived. I always imagined Max the artist being the Lucien Freud look. Topless with paint all over him. I imagined him tall and white-haired.

Visually, the film is very striking. What aesthetic discussions did you have prior to filming?

It was important to me that we didn’t attempt to create, or re-create a “real” place. It’s a Soho of the imagination. A Soho of memory. Narrow alleyways, lots of neon, cheap hotel rooms, a dive bar, all shot on a stage. I was really lucky to find collaborators who were excited by the vision and they embraced it, and inspired me to take it further. In terms of references, we talked about Caravaggio’s paintings, about the cinema of Wong Kar Wai – Happy Together, In The Mood For Love. And Jarman of course. 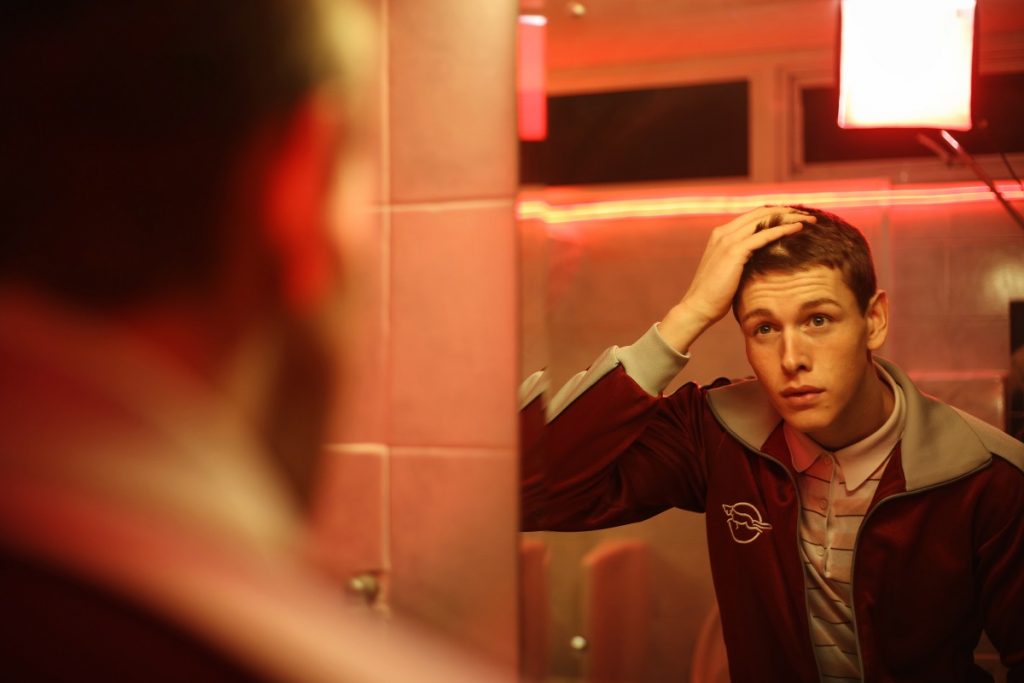 Can you talk a little about the editing process?

It took a long time to find the film again in the edit, to find what we hope is the right pace and rhythm. It’s not a conventional narrative, it’s more a series of moments – postcards if you will – that hopefully build into something. For me that’s what cinema is about – images and moments. I was blessed to work with a great editor, Stephen Boucher, who understood what I was aiming for, even if I sometimes didn’t know how to get there myself! He taught me a lot actually. It was a long process, but a really fulfilling and enjoyable one.

The soundtrack is also great. Can you tell us about the music?

I wanted a punk soundtrack, lots of guitars – as a counterpoint to the visuals. I thought it would be interesting. Of course, there was very little money, but we managed to find some great songs through our Music Supervisor, Christian. The original score is by Julian Bayliss – mostly centered around the main character Jim, when he encounters the paintings – it’s beautiful I think, but we wanted to have fun with it was well, be quite playful, like when he’s having his photograph taken or when he meets the Raconteurs, it’s Baroque with a twist. There are also a couple of songs performed by Jonah Hauer-King, who plays David in the film. He sings Funny Valentine in the hotel room. It’s such a beautiful performance, it completely transforms the scene.

What is the audience for the movie?

Gay or straight, it doesn’t matter. I’m trying to talk in an optimistic way about the city and what it can offer. People of my generation I think will recognize something familiar in it. People who remember Soho before it became more corporate.

Have you enjoyed being back in the saddle? In the director’s seat?

I’ve had moments of self-doubt. But I’m very lucky to be surrounded by people who were totally committed. I hope I don’t have to wait another 20 years to do another one! I’m writing something else.