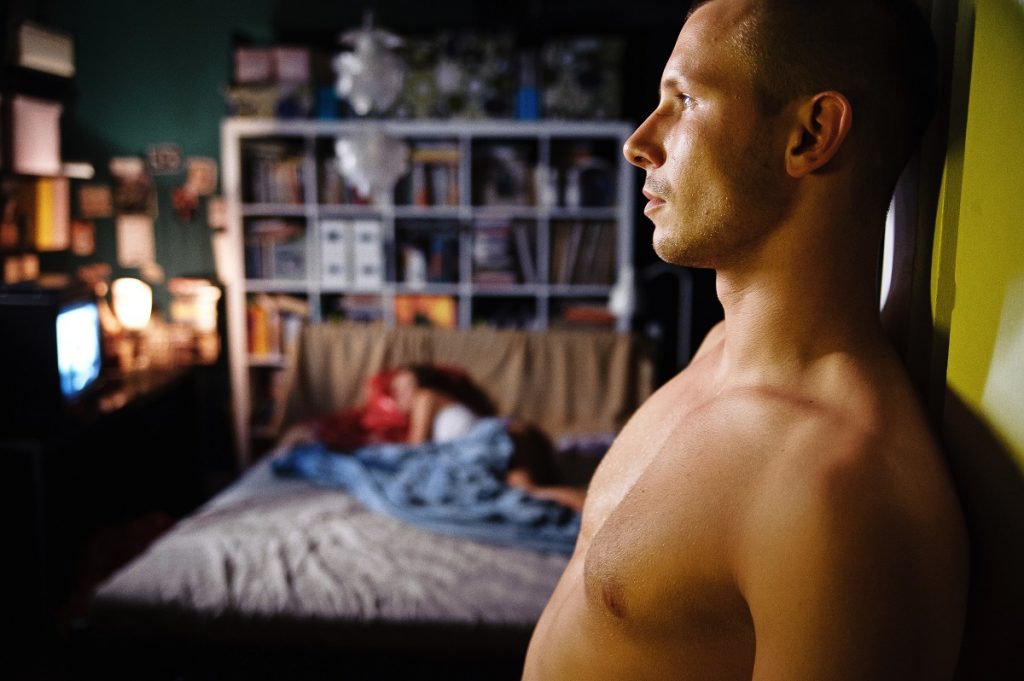 Kuba (Mateusz Banasiuk), a champion swimmer, wants to have his cake and eat it too. He’s in a committed relationship with Sylwia (Marta Nieradkiewicz), but he’s carrying on an affair with Michal (Bartosz Gelner), a naïve, slightly younger fellow athlete who, initially, yearns for more affection than Kuba is willing to give in his state of sexual confusion. As the two boys spend more time together, Michal finds the courage to come out to his family while Kuba starts falling more and more in love with his best gay buddy. Sadly, Sylwia and won’t let Kuba go so easily. By trying to hold on to two loves at the same time, Kuba ensures as tragic ending for everyone involved. Prizing setting and mood over dialog and incident, Floating Skyscrapers makes up for a lack of action with gorgeously-rendered, highly erotic sex scenes. The director stages intimate moments that giving the audience a clear view of Kuba’s bisexuality, and showing how he treats both his male and female lovers. 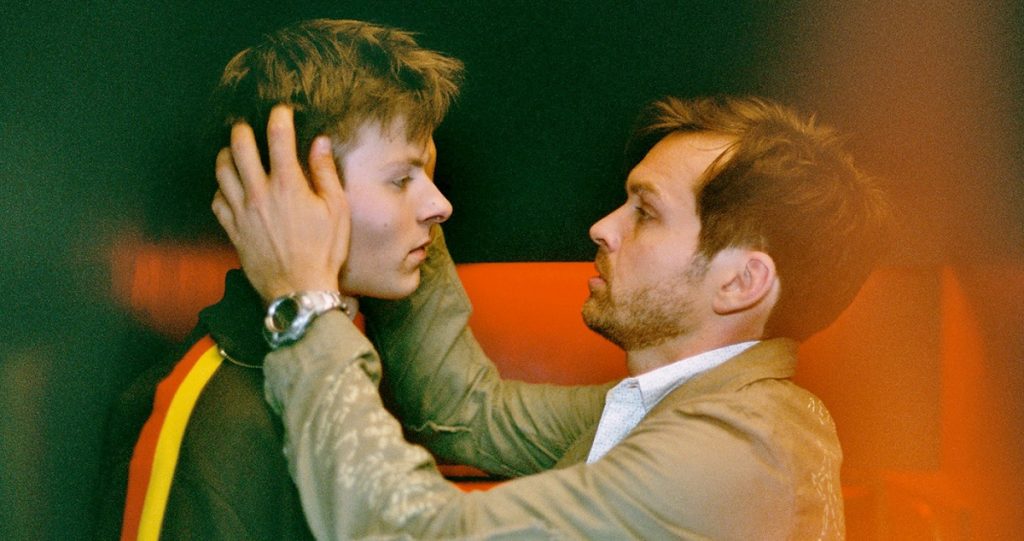 Writer/director Christian Moris Müller divides his unique film Four Windows into four chapters: “Son,” “Daughter,” “Father” and “Mother.” The film tells what happens to each of these family members, none of whom are given specific names, during a single sexually-driven day in their lives. The very hot Son (Frank Droese) says goodbye to the family, meets his buddies and then veers off alone to his favorite adult arcade. There, he has some steamy booth sex with a gruff man who refuses to kiss the tender lad. Blowing off a crucial exam, he revisits the place several times, seeking the man – to no avail. After this juicy start, Dad (Thorsten Merten) hires a hooker and some very odd things happen. Meanwhile, Mom (Margarita Broich) is seducing the building’s handyman and Daughter (Theresa Scholze) begs older men to fuck her on the subway. As you must have gathered, these people aren’t exactly the Cleavers. Told entirely from inside the heads of these separate characters, lovers of salacious cinema will want to peer through these dirty windows. 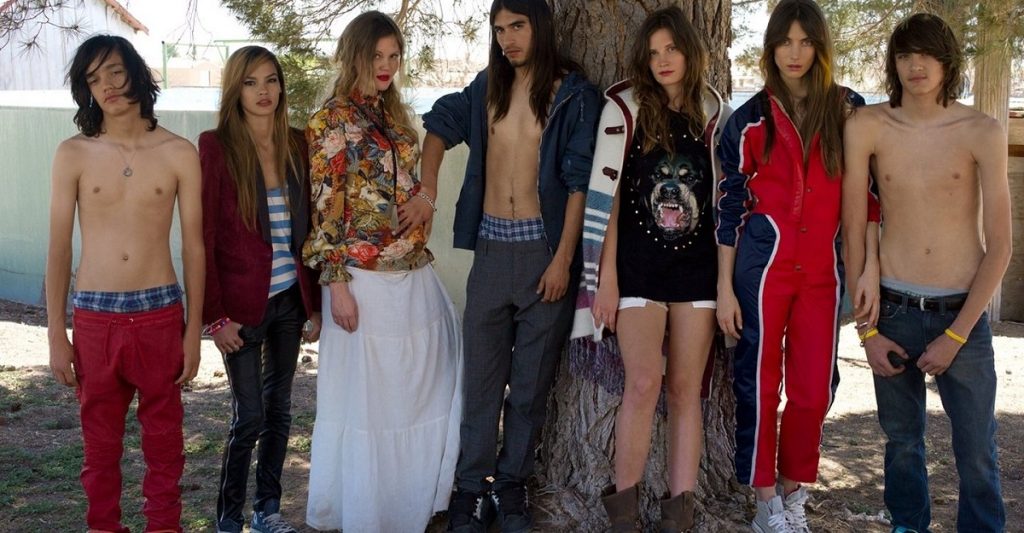 Written and directed by extremely controversial enfant terrible Larry Clark (the legendary photographer and filmmaker behind Kids, Ken Park and Bully), Marfa Girl follows Adam (Adam Mediano), a directionless 16-year-old boy living in the working class US/Mexico border town of Marfa, Texas, and his sexual relationships with a wide variety of people – his teenage girlfriend, a twenty-something neighbor, an aggressive local artist, his high school teacher. While our protagonist makes the most of his sexual awakening, a misogynistic, deeply unhinged border patrol agent (Jeremy St. James) watches over the neighborhood an forms an increasingly dangerous obsession with virile young Adam. What ensues is a web of sex, drugs and violence. Clark is always looking to push the envelope and Marfa Girl is no exception. 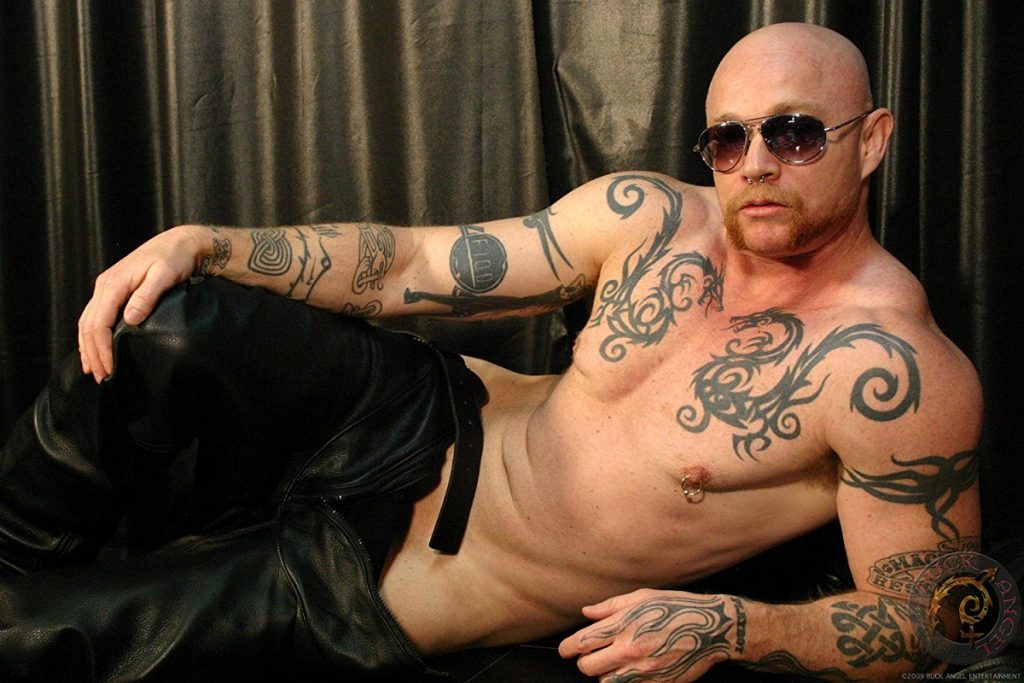 In a paradise of sun and sea, three young people on the brink of adulthood navigate the complexities of love, sex and secrecy with disastrous consequences. Lily and Finn (Phoebe Naughton and Andrew Mullan) meet one drunken night in a club and begin the perfect summer romance – until they meet up with Lily’s seductive younger brother Jamie (George Stocks) and sexual alliances are tested. As the temperature rises outside, the heat between these three individuals brings tensions to a boiling point inside as well. An intimate look into the strains of familial bonds and awakened romance, Palace of Fun explores how far young people will go to keep up appearances and maintain their identity. As secrets are revealed, you can’t help but become compliant in the debauched behavior of these dubious characters. Palace of Fun envelops the viewer in an irresistible world of questionable morals and fervent intentions.