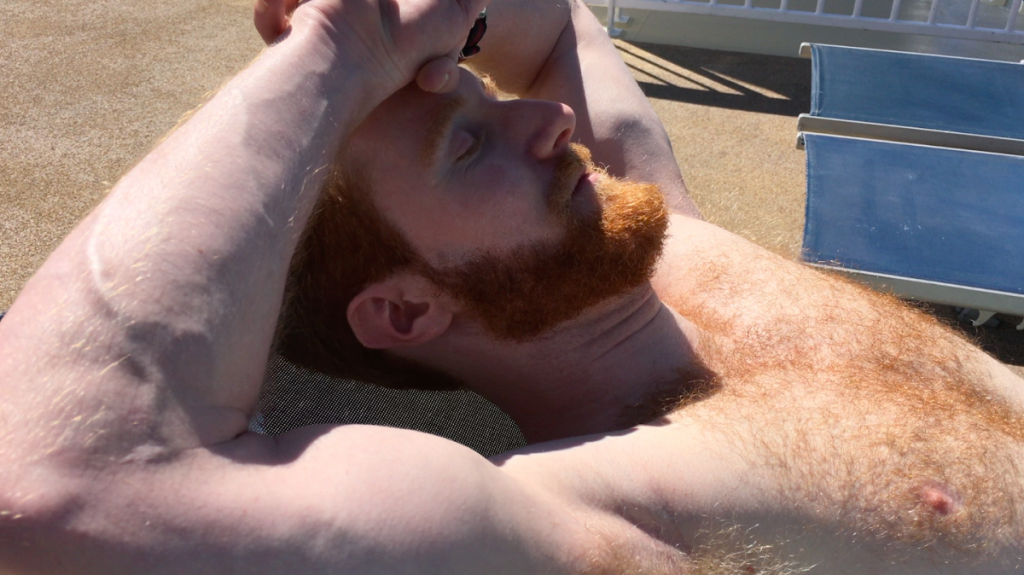 Happiness Adjacent explores the romance that blossoms between Hank (Adam Fried), a nice gay Jewish boy traveling alone on a tropical cruise, and Kurt (Ian Dick), a bisexual man vacationing with his wife, Kate (Rachel Alig). While Hank isn’t looking for a relationship, he can’t deny his immediate attraction to Kurt and their intense connection. As Hank struggles to get past his own issues and his past failed relationships, he can’t help but wonder if Kurt is secretly looking for a way to break up the monotony of his seemingly stale marriage. Is this just a vacation fling, or is it a chance for both men to find true happiness? Shot entirely on location on the iPhone 6S Plus, Happiness Adjacent is the terrific ninth feature film from writer/director Rob Williams – the same guy behind Shared Rooms, The Men Next Door and Make the Yuletide Gay.

Unable to make progress with her “ex-lesbian conversion therapy” path, the deeply neurotic “All American” Jill (Jen McPherson) tracks down her ex-girlfriend Jamie (hilarious writer-director Michelle Ehlen) to prove to herself that she is no longer attracted to her. Strung along by guilt and desire, Jamie agrees to the preposterous plan of “dating” Jill so that Jill can close this chapter of her life and move forward with men exclusively. Meanwhile, David and Lola (Keye Chen and Shaela Cook) compete for the affections of Jos (Geovanni Gopradi), a sexually ambiguous and seductive man from Brazil – and they compare notes on their differing opinions of his sexuality. As complications arise with Jill and Jamie’s relationship, Jill starts to see Jos as her ticket out. However, when the love triangles shift and realign, Jamie starts having her an identity crisis of her own – one that’s she is ill-equipped to handle. A mix of over-the-top comedy, sharp wit, and pathos, Heterosexual Jill rides the edge of laughter and pain to explore the complicated attachment we have to our sense of self (especially in the face of love). 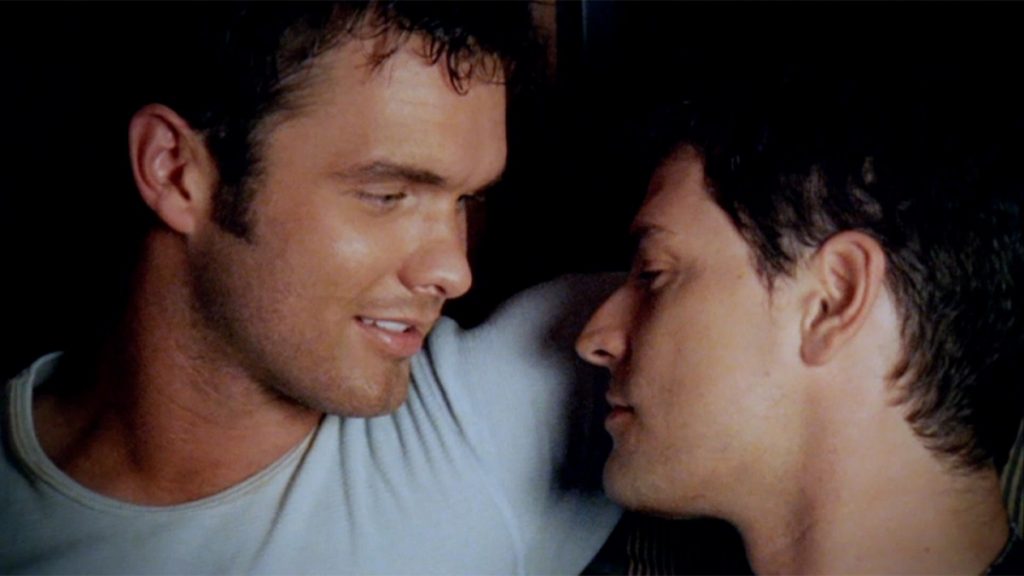 Brian Brecht (Mark Whittington) is a closeted gay movie star who’s come to Miami on a film shoot. Though journalists watch his every move in the hopes of outing him, Brian can’t help but start a fling with the handsome bartender at the hotel. Meanwhile, Brian’s manager arranges for an ambitious starlet to pose as Brian’s girlfriend, a televangelist hires a diva crime boss to carry out an assassination, and a local art dealer fends off an abusive ex. Though these seemingly unrelated characters don’t know it yet, their lives are on a collision course that will end in scandal for some and death for others. Lost Everything is a low-budget thriller about the power of both love and deception. An award-winning film festival hit, this feature debut from director Kim St. Leon shows how some people will lose everything just to keep the small things that can’t be taken away. 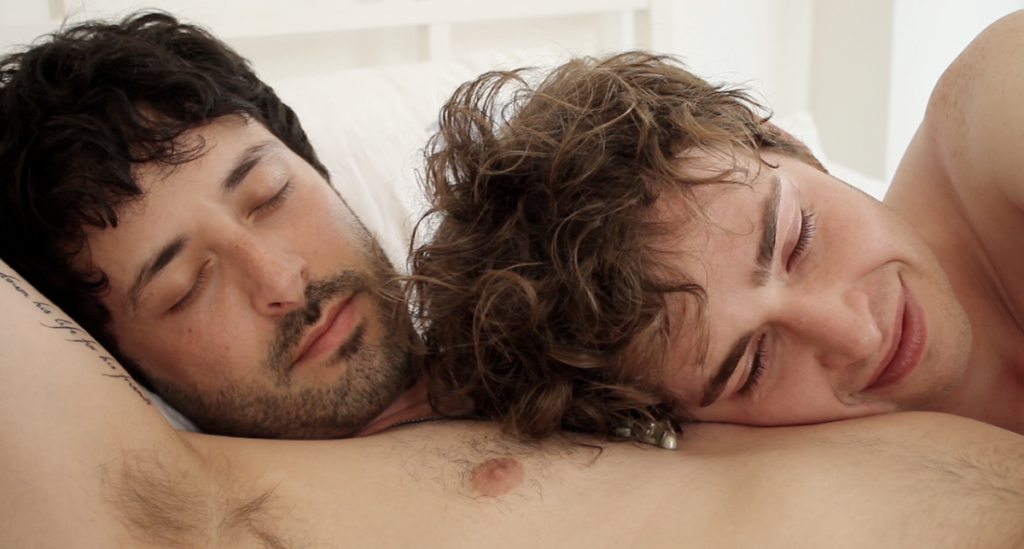 Three in a Bed © TLA Releasing

Three in a Bed

Three in a Bed is a romantic coming-of-age comedy set in Manchester, following the life of a struggling musician named Nate (Brennan Reece). Nate desperately seeks his own personal independence, but when his two sisters come crashing into his life, and with the arrival of his new adorable neighbor Jonny (Darren Bransford), everything is frantically turned upside down. Will Jonny and Nate find true love? Or will the pressures of living with his two sisters pull them apart. Worst of all… will he have to come out to his family? Reece and Bransford make an adorable couple in this charming gay romance from director Lloyd Eyre-Morgan, the same filmmaker behind the feature-length romantic drama Dream On and the creator behind the comedy series Outings. 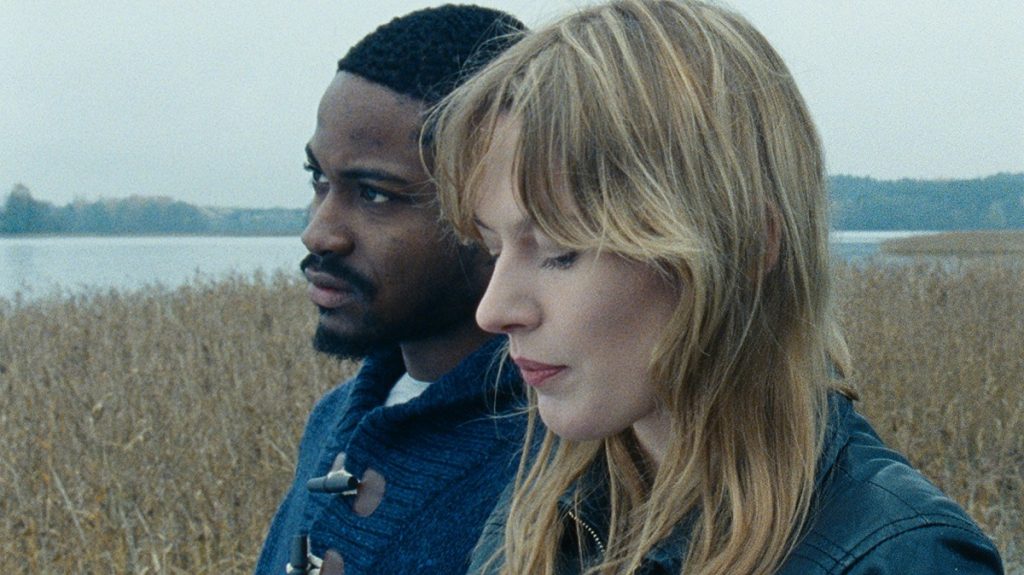 Luke (Ebeneezer Nii Sowah) is an up-and-coming DJ from an affluent New York family with a Lithuanian father and an African-American mother. When Luke hears from an estranged grandmother in Lithuania, he defies his parents and decides to visit this far-away country, flying straight to the capital city Vilnius. He falls in love with the city, a rebellious girl called Marta (Beata Tiskevic), and the local music scene, becoming part of The Beatmakers, promoted by an aggressive gay manager, Andy (Sarunas Zenkevicius). Luke’s grandmother’s connections get him a deal with the municipality to become the manager of a new nightclub, and he takes up the challenge… but the deal turns out to be poisoned and Luke soon must rebel in ways he never imagined. We Will Riot offers up an entertaining and socio-politically-charged glimpse of today’s Lithuanian youth and their struggle against legal, governmental homophobia and discrimination. Director Romas Zabarauskas is an openly gay LGBT rights public speaker in Lithuania. This was his first feature-length film released in the United States (check out the newer You Can’t Escape Lithuania as well).